Suppressors are an investment, both in terms of money and your own physical well-being. You only get one set of ears, so your hearing is a precious commodity that you need to take care of. Unfortunately, suppressors are not inexpensive, so like any other time you’re considering how you’re going to invest your money, it’s wise to do your research first and be extra sure of where you’re putting your money.

We’ll go over some of the key things you should consider to help you decide what suppressor is right for you and your specific needs, both in the present and in the future.

What will the Suppressor be Used for?

Determining how you’re going to use your suppressor is the first step in picking one out. Certain suppressors are geared toward one or maybe two applications and they do them very well. Other suppressors are more multi-faceted and are suited to a wider variety of types of shooting.

Once you determine what you’ll be using the suppressor for, you can start narrowing down your choices.

Hunting is one of the best applications of a suppressor. Unfortunately, most hunters don’t wear hearing protection when they’re in the field. This is often because they want to hear all of their surroundings and be aware of any game in the area. While completely understandable, this also means that a hunter’s ears will take a beating when it comes time to shoot. Using a suppressor eliminates that danger.

Trapshooting is a shotgun sport, and so this is going to greatly limit the number of suppressors you can choose from because companies simply don’t offer as many options for shotgun suppressors. The most well-known offering is going to be the Salvo 12 from SilencerCo. There are a few other options out there, but the companies do not have name recognition like SilencerCo. Again, just do your research first. 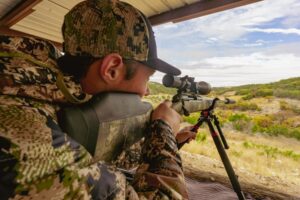 People who participate in long-range shooting often use suppressors because the reduced report of the gunshot is less of a distraction to their overall shooting process and experience. Using a suppressor for this type of shooting, which requires extreme skill and concentration, is also done to mitigate some of the gun’s recoil and help keep the gun on target for the entire shot process. Reduced recoil is an added benefit of using a suppressor.

The Material of the Silencer

A lot of time and energy goes into every aspect of silencer design, not the least of which is determining which materials to use. Picking the right combination is critical for performance, weight, durability, longevity, balance, and more.

Aluminum is often used in suppressor construction because of how light the weight of it is. When it comes to suppressors, every ounce or fraction of an ounce adds up, and the more they weigh, the more you’ll feel it hanging out there on the end of your barrel.

While aluminum may be beneficial because of its weight, its main drawback is durability. An aluminum suppressor and its components won’t hold up as well over time as a suppressor made out of a stronger material like steel.

Steel is one of the most common materials used in suppressor construction. The main benefit of using steel is its strength. Lots of items that have to be strong are made of steel, so it makes sense that suppressors would be made of it, too.

Titanium is a great material for suppressor construction. You get the best of both worlds in terms of the materials listed above. Titanium offers the strength and durability of steel with the lightweight properties of aluminum.

Essentially, you get a rock-solid suppressor built out of an incredibly durable material that will last a lifetime, but you won’t have to sacrifice additional weight because titanium offers exceptional strength at a surprisingly lightweight.

The Type of Gun You Have

The type of gun you have will also play a role in determining the kind of suppressor you should get. This was hinted at above in the trap shooting section. You can’t use a rifle or pistol suppressor on a shotgun, or vice versa. Now, you can use some rifle and pistol suppressors interchangeably, but make sure you read your owner’s manual first to be absolutely sure.

The only type of gun that you cannot use a suppressor on is a revolver – with the exception of just a couple of late-19th and early-20th century gas seal models. These are uncommon guns, so it’s fairly safe to say that none of the revolvers you own are compatible with a suppressor simply because of their construction and the interface between the cylinder and the forcing cone. 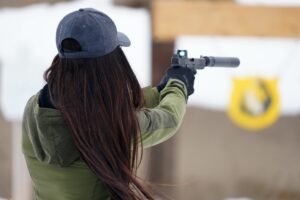 Adding a silencer to a pistol is a very popular setup these days. However, it’s important to remember a few key things when pairing these two pieces of equipment: barrels and sights.

Not all pistols come with threaded barrels from the factory, so you may need to buy an aftermarket barrel for your pistol before you can attach your new suppressor.

Most pistol sights will be obstructed by the suppressor on the end of the barrel. Depending on how you’ll be using the gun, you can either choose to “sight through” the suppressor or buy a pair of aftermarket suppressor-height sights. 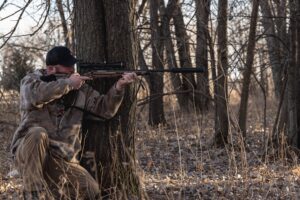 Rifles and silencers are a match made in heaven! If you’re trying to get as close to “Hollywood quiet” as possible while stalking squirrels in the woods with a .22 caliber rifle, then a suppressor is going to be a key part of your setup.

Or maybe you’re just trying to take the audible edge off of a big bore rifle out of courtesy to either your neighbors or those on the shooting lanes on either side of you. Silencers don’t make guns silent, but they can definitely make them less harsh on the ears.

There’s also another side-benefit to shooting a big bore rifle with a suppressor, and that’s recoil reduction. Sure, suppressors bring down the decibels, but their construction also lends them to recoil reduction because of the way they move the gases through the baffles and out the muzzle. While not a primary design function for a suppressor, it’s definitely a nice add-on benefit when it comes to shooting large calibers that can be punishing to your shoulder.

Take the First Steps to Find a Suppressor for You

Reading this article all the way through to the end is a great first step to finding the right suppressor for you. From here, talk to friends and fellow shooters, chat with the staff at your local gun shop, hop on some internet forums, and soak up as much info as you can.

Then, when you’re ready to purchase your silencer, give us a call. We’ll walk you through the entire purchase, file all of the paperwork for you, get you squared away with a free gun trust, break up your purchase into interest-free payments, and ship it right to your door once it’s been approved. It doesn’t get any better than that!