The popularity of these two calibers is driven by their diversity. They are used successfully in a wide variety of the same situations and settings despite being radically different in every way.

Let’s take a look at how 5.56 and 9mm stack up against one another while recognizing that it is indeed an apples to oranges comparison in many instances.

The 5.56 cartridge and the 9mm cartridge are visual and technical polar opposites. The overall lengths between the two – both the bullets and the cartridges – are completely different. The weight of the bullets for each cartridge is also significantly different. Material makeup, however, is where their paths cross.

Here’s how the 5.56 and 9mm compare and contrast with one another in a series of crucial aspects.

There’s a finite number of materials to use in the creation of cartridges, and so there’s a fair amount of overlap between the two calibers. Both can be made with steel or brass cartridge cases and both can be outfitted with bullets made from a variety of steel, copper, and lead alloys to fit certain purposes.

The biggest visual difference between 5.56 and 9mm cartridges is their overall length. Since the 5.56 is designed for a rifle action and the 9mm is designed for a pistol action, they are vastly different in terms of size.

The 5.56 rifle cartridge is inherently more powerful than the 9mm pistol cartridge, so you might expect the 5.56 to be a lot louder than the 9mm, but that’s not the case. They’re actually pretty close to one another.

Both calibers benefit greatly from the use of a suppressor, and the sound levels can be brought down to a hearing-safe level when used in conjunction with the right load of ammo. 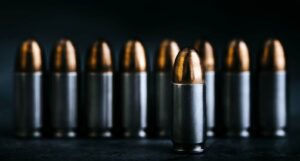 Because of the popularity of both 9mm and 5.56 calibers, there are a plethora of ammunition choices for each on the market. Do your own research based on the specific firearm and specific purpose before deciding on which kind of ammunition will work best for your application.

Subsonic ammo is available for both calibers, which eliminates the typical crack of a gunshot as it breaks the sound barrier. If you’re using subsonic ammo with a suppressor, you’ll definitely be bringing the decibel levels down to a hearing-safe level.

Just be aware that subsonic ammo operates differently in semi-automatic weapons, which depend on the gases to cycle the action of the gun. Make sure to test out your combinations before trusting your life to them.

Effectiveness of the Weapons

The simple fact of the matter is that these two calibers would not have survived and thrived for this long if they were not effective in their given weapons systems.

Both 9mm and 5.56 cartridges are very accurate. In the hands of a competent shooter who knows what they are doing, there’s no reason to expect anything other than accurate shots from a firearm chambered for 9mm or 5.56 ammo.

As you might have guessed, the popularity of the 9mm and 5.56 cartridges is due in no small part to the wide variety of uses to which they are suited. They often overlap one another for a variety of reasons and purposes and are used by countless individuals in similar situations who have determined for themselves that these calibers are the best choice for the given job.

A handgun or pistol caliber carbine chambered in 9mm is the gun-caliber combo of choice for countless people. A 9mm handgun can sit on the nightstand and be grabbed in a flash. Or, a 9mm pistol-caliber carbine can be retrieved quickly and provide the benefit of a longer barrel and accuracy with the same cartridge.

Similarly, AR-style pistols in 5.56 are common selections for plenty of people when it comes to home defense. You can have the power of the 5.56 in a smaller package that is more easily maneuvered through a home than would be possible with a 16″ carbine or even a 20″ rifle.

Both calibers are very popular for hunting. Of course, it is key to know the specific type of ammo you will be using and how it performs when paired with the firearm of your choice. For example, you wouldn’t hunt squirrels with a 20″ rifle chambered in 5.56 and you wouldn’t hunt buffalo with a 4″ pistol chambered in 9mm.

As long as you make the proper pairing for the game you’re hunting, then there’s no reason not to use 9mm or 5.56 cartridges in those situations.

Without a doubt, one of the most popular uses for 5.56 and 9mm cartridges is in the marksmanship and sports competition settings. There’s no shortage of training and competition opportunities for firearms in both calibers. In fact, there are some sports, such as 3-Gun, where you’ll use a handgun chambered in 9mm and a long gun chambered in 5.56 for different stages of the same match.

As we mentioned at the beginning, comparing 5.56 to 9mm is a sort of apples to oranges situation. Of course, there’s a great deal of overlap between the two, but the ultimate decision of which one to choose is up to you.

Regardless of which one you choose (or hey, choose both – this is America!), there’s no denying that the best way to step it up a notch is by shooting 9mm or 5.56 with a suppressor.

At Silencer Central, we have no shortage of great suppressor options for 9mm and 5.56 and we can make sure you’ve got the right one for your specific needs. Give us a call and we can talk you through your options and get you started on the path to suppressor ownership. We make the process as easy as it can be, letting you do the entire thing from the comfort of your own home.

From the initial paperwork to the final delivery to your door, we will handle it all for you. Get started today and enjoy the benefits of shooting 5.56 and 9mm suppressed!

The Banish 30 Gold is a quick-detach, 30 caliber suppressor and is rated for rimfire to .300 RUM. Premium accessory package included.

How Long Does Ammunition Last?