Recoil management is one of the most important skills when it comes to shooting firearms. It doesn’t matter if you’re just plinking with a .22-caliber pistol, competing in a long-range shooting event, or hunting elephants with a big bore rifle in Africa. It’s something you need to know how to do – period.

Thankfully, it’s not hard to learn how to manage recoil. If you’re a new shooter, it’s even easier to learn because you haven’t created any bad habits yet. Even if you’ve been shooting for a while, that’s OK; don’t worry, we’ll have you breaking those habits and managing recoil like a champ in no time at all!

For every action, there is an equal and opposite reaction. Remember that phrase from school? If not, that’s OK; we’ll help you out. It’s Newton’s Third Law of Motion and it directly applies to recoil.

The explosion that takes place in the breach of a gun when a round is fired produces a lot of energy. The vast majority of that energy is used to propel the bullet out of the barrel. (That’s the “action” part of the law.) The rest of the energy is transferred through the gun itself and causes it to move back toward the shooter. The movement you feel from the excess energy moving in the opposite direction from the bullet is what we call recoil. (That’s the “equal and opposite” part of the law.)

Recoil is a natural part of firing a gun no matter how small the caliber may be. Obviously, smaller calibers can produce recoil so small that you hardly notice it, but it is there nonetheless. There’s no way to eliminate recoil entirely, but it can be mitigated, managed, and reduced through a number of different tips and techniques.

Effective recoil management means using the mass and bone structure of your body to absorb the recoil energy of a firing gun and transfer that energy throughout the entire body so that you can easily re-acquire a second sight picture after the process of recoil and follow-through is complete.

At a minimum, recoil can be scary if you’re not prepared for it. At its worst, recoil can be downright dangerous if you don’t handle it properly. This most often happens to newer shooters who don’t understand the physical mechanics of shooting or people who are unprepared or underestimate the power generated from larger calibers.

If you’re shooting a gun that has a scope on it and you’re not properly positioned behind it with a good grip on the gun, the recoil of the gun can cause the scope to hit you in the face. This can result in a black eye or even a cut that could require stitches.

Rifles or shotguns in large calibers or gauges will recoil significantly more than their smaller counterparts, so you’ve got to make sure you have the gun pulled in tight to your shoulder. Failure to do so can lead to serious injuries. It is not unheard of for people to suffer shoulder bruising and even separation or dislocation if the impact from the recoil is serious enough.

A recoiling gun creates movement, and movement is bad for consistency. While it might not seem like you’re moving around a whole lot, it’s important to understand that even a small amount of movement at the muzzle can mean a lot of movement out at the point of impact, which is obviously greater if the distance is farther.

Tying in with firing consistency is follow-up shot accuracy. The better you manage the recoil of your first shot, the faster and easier it will be for you to get back on target for your second shot.

Whether you’re in a competition setting or in a hunting situation, the second shot is often just as important (or more important) than the first one. Proper recoil management means that you’ll make that second shot perfectly when it counts the most. 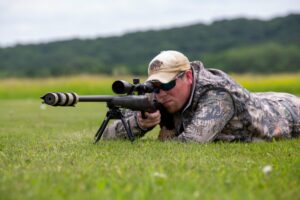 We’ve talked a lot about what recoil is, how it can be dangerous, and we’ve even brought science and Mr. Newton into the conversation. Now it’s time to get down to the nitty-gritty and actually discuss what you can do to manage recoil.

Depending on the type of shooting you’re doing, you may be in different types of shooting stances or positions for the optimum shot. This means you might be standing, kneeling, or prone on the ground. Picking the right shooting stance is the first key step in proper recoil management.

2. Get the Right Grip

If you’re shooting a rifle or a shotgun, you’ll want to make sure that the gun is properly seated and pulled in snugly to your shoulder pocket. Then you’ll want to have a solid grip on the forend of the gun as well. Of course, none of this matters if the gun is too long or too short for you to comfortably hold, so if the gun feels awkward, then it’s going to be awkward to manage the recoil.

With a handgun, you’ll want to get a firm, two-handed grip on the gun. Place your hands as high up on the backstrap as possible, keep your palms firmly placed on the gun, and position your thumbs forward. This will create a solid first point of contact for the recoil to enter your body and begin the management journey.

3. Put Tension in Your Wrists

After recoil travels through your hands, its next stop is your wrists. Since your wrists are meant to move, you don’t want to lock your wrists when shooting – but that doesn’t mean you want them to be loose either. Instead, just place some tension in them.

It’s important to understand that locking your elbows doesn’t have to mean locking your arms straight out. In fact, you shouldn’t do that at all. Instead, place your elbows in a comfortable, partially-bent position. This allows your elbow joints to absorb and mitigate the recoil better than if they were in a completely rigid and straight line.

Muzzle brakes are specifically designed to help manage recoil. They attach to the muzzle end of your barrel and redirect the escaping gases caused by the firing of the gun in a different direction. By changing the direction of the gases, you’re changing the movement of the gun, which can help manage the recoil.

Buy a Silencer and Start Shooting with Less Recoil

Sure, we all know that silencers reduce the sound of gunfire and bring it down to a hearing-safe level, but that’s not all they do. Silencers are overachievers. They also reduce the recoil of a gun without requiring any extra effort on their part or yours.

When using a silencer, that explosive gas is trapped and dispersed through its internals before finally exiting the muzzle of the unit. That brief trap and dispersal of the gas will reduce the energy it has upon final exit, which reduces felt recoil and allows you to manage the recoil better.

If this sounds like a kind of recoil management that you want to try, then you’ve come to the right place! Silencer Central is the nation’s largest silencer dealer, selling to customers in all 42 states where they are legal to own. We’ve been doing this day in and day out for more than 15 years, so we’ve got the process down pat and have made it as simple as possible.

Give us a call today and get started on your silencer-assisted recoil management now!

15 Deer Hunting Tips that Will Make You a Better Hunter