When Was the First Suppressor Made?

However, somewhere between 1902 and 1934, the racist mythology of suppressors as gangster weapons used for silent murder lead to a heavy crackdown on the sale of suppressors. No longer a mail-order hearing safety device, they required federal registration, and a heavy-handed for the time $200 tax. Suddenly Maxim’s safety device was caught up in a moral panic that treated it as some sort of highly dangerous tool.

Fast forward to the present day, and silencers are once again getting the respect as a safety device that they deserve. While still burdened with federal paperwork and a $200 tax, modern demand and manufacturing methods have made suppressors cheaper and easier to get than at any point since the passage of the National Firearms Act in 1934.

So why should you buy a suppressor and what are the benefits? Well, they’re the same today as they were in 1902 – only better. If Maxim could see a Banish Suppressor, he’d be astounded. Lightweight, modular, adjustable, and multi-caliber, today’s suppressors are more advanced than they’ve ever been, which only makes them more appealing than at any point in history. 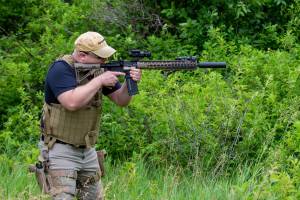 Here are some good reasons you should be using a suppressor right now.

We see a lot of suppressors on tactical weapons or guns used for personal defense. This is a popular and important market for suppressors, but suppressors are equally important for your hunting and range guns. That’s why Banish Suppressors sells the world’s first true multi-caliber suppressor that can be modified to fit multiple different popular centerfire hunting rifles from .22 through all common .30 calibers.

When you’re hunting, wouldn’t you enjoy the peace of mind that comes with having a lightweight, sound-busting suppressor on your rifle? Not only do you protect your hearing, but you make the wilderness a nicer place with a quieter shot.

Today’s hunters are rediscovering what their great grandparents already knew about suppressed hunting rifles – they are nicer to shoot.

A common complaint is that shooting is loud, and the noise pollution that comes from shooting ranges, or people shooting on their private property has long been a point of contention with those who have to listen to it.

It is a proven fact that suppressors reduce noise pollution. An unsuppressed .308 rifle can generate as much as  while the use of a Banish 30 reduces that to a nice and friendly . Imagine how much nicer shooting a suppressed rifle would be not only for yourself, but the people around you, or other property owners near your favorite shooting spot.

In other words, a suppressed rifle is just plain old fashioned good manners. In fact, the United States is an outlier when it comes to how suppressed rifles are treated. Many European nations – even those with harsh gun control make buying a silencer easy, and often require their use when hunting. Most folks already know a suppressed rifle is a safe, quiet, friendly rifle, so isn’t it time to make yours friendly to your ears and the ears of folks around you?

All-Day Hunting with Suppressors is Easy

Varmint hunters especially love silencers – particularly the light, all-titanium Banish Suppressors. Shooting prairie dogs all day long can be tiring, and the sound from gunshots can be wearing. But a silenced rifle makes a quieter day and easier shooting session. The same goes for any other kind of hunting or shooting sport where you might be shooting for hours on end. Quiet guns make happy shooters. 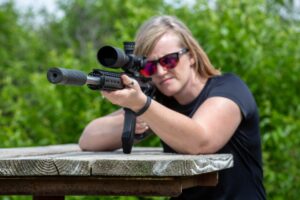 These Aren’t Your Grandfather’s Silencers

We already touched on modern silencer technology and the fact is that today, at this moment, is actually the best time in history to own an advanced silencer. Gone are the days of heavy steel tubes and baffles. Modern suppressors like the Banish Suppressor are all about lightweight, modular construction and scientific design.

You Can Hunt With a Suppressor in Almost Every State

Isn’t It Time To Enjoy a Suppressor?

If you’re ready to give up loud guns, reduce noise pollution, and be a good neighbor and sportsman, then it’s time to buy a suppressor. If you’re ready to enjoy a true multi-caliber suppressor that you can quickly reconfigure to fit multiple guns and that’s made of lightweight, stronger-than-steel titanium, then it’s time to get a Banish Suppressor.

Back in 1902, Hiram Maxim had a vision of quiet shooting rifles that protected the environment and the hearing of shooters and non-shooters alike. Today, Banish Suppressors drives that dream forward with innovation and quality and is putting suppressors back on hunting rifles like our ancestors once enjoyed. Isn’t it time you got one too?