With 2021  in the books, we thought it would be a good time to take a look at the best AR-15 suppressors available on the market for 2022.

Indeed, the rush to buy firearms, particularly among those first-time buyers who previously either sat on the fence, were outright opponents of the Right to Keep and Bear Arms or those who never got around to it completely overwhelmed the NICS (National Instant Check System).

With the release of the revamped ATF eForms and reduced wait times, 2022 may be the year to take a look at purchasing a quality suppressor for your rifle.

What to Look for in an AR-15 Suppressor

There are many factors that go into choosing an AR-15 suppressor. Although they would seem to be similar on the surface, the true answers are mostly user-driven. There is a difference between what a varmint hunter needs on an AR-15 for a prairie dog hunt and what a SWAT officer needs on a CQB rifle.

For most hunters, weight and length are critical factors, especially if they are covering long distances on foot. For a CQB type suppressor, length and durability are more critical. Someone who has an assortment of rifles that can share a suppressor may have to evaluate whether it is easier to go with a quick-detach or direct thread method for mounting. Some shooters want the quietest suppressor they can find while others just want enough of the edge taken off so that they can shoot without hearing protection or be able to communicate with their team members.

It is important to evaluate your needs and goals before you go into this and to even consider future needs and goals, as these do tend to change over time. You may have only one AR-15 in 5.56 for which you will need a suppressor at this time. That may change in six months or even 3 years from now should you add a .308 caliber rifle to your collection or maybe an SBR or braced AR-15 pistol. 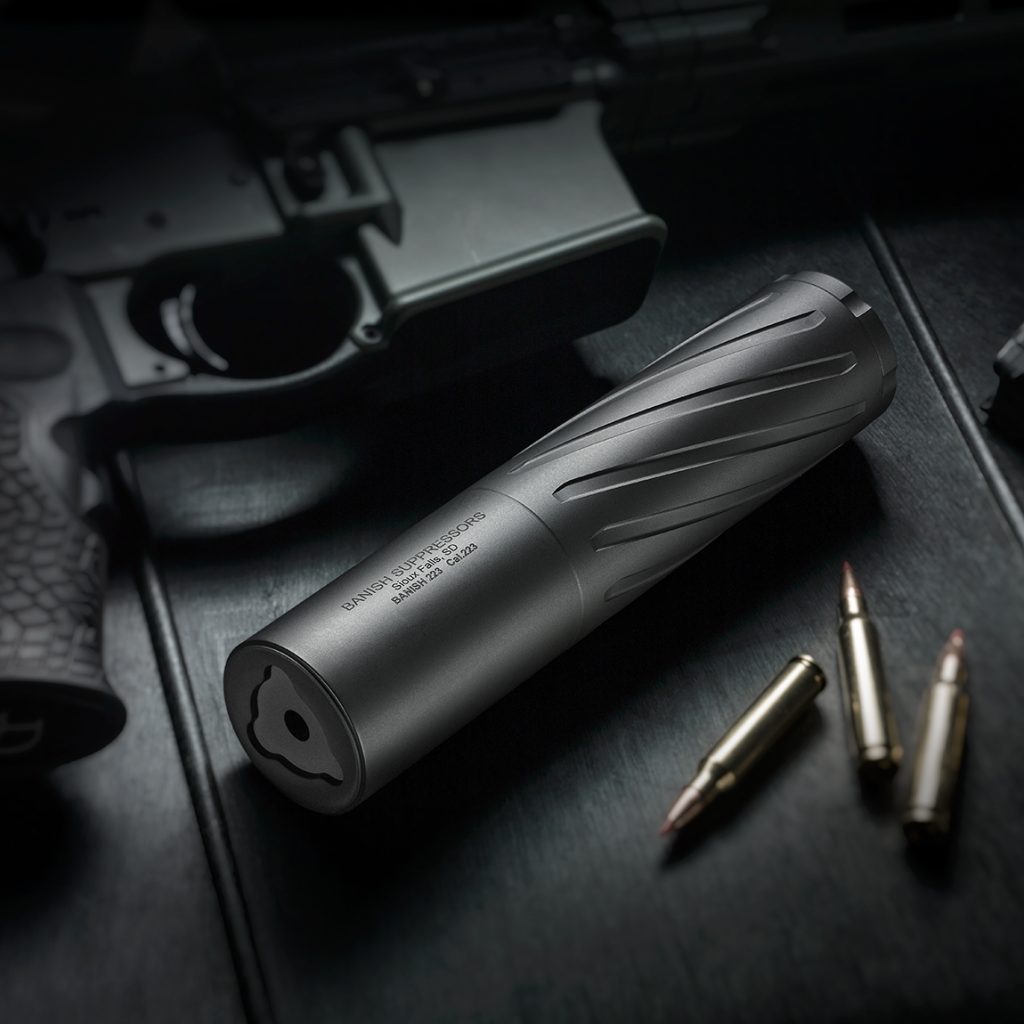 It may seem as if we are playing favorites, but we think the BANISH 223 is the best overall suppressor for use on an AR-15. It uses a direct thread mounting system and will attach to any rifle with a ½ x28 thread pitch.

With a lightweight rifle like the AR-15, you want to keep length and weight down on the suppressor. The BANISH 223 accomplishes both of these with its 7” length and 9 ounce weight. This is a good one for shorter length AR-15 carbines and braced pistols.

Like all BANISH suppressors the BANISH 223 is completely user serviceable.

It’s not always just the $200 tax stamp that makes it tough to buy a suppressor for an AR-15. It is usually the excessive wait time and the tying up of discretionary funds for a long period of time that gives many of us pause. For that reason, many shooters want to make their investments go the extra mile and to be able to use their AR-15 suppressor on as many different hosts as they possibly can. Their goal is to find the ultimate multi-caliber suppressor.

In most instances whenever one tool attempts to fill numerous roles, the end result is a tool that does nothing really well. Fortunately this is not the case when it comes to a multi-caliber suppressor like the BANISH 30.

For example, a number of .30 caliber or 5.56 suppressors and even pistol silencers can effectively suppress the sound of rimfire rounds. The trouble is that rimfire rounds are notoriously dirty and will quickly foul these suppressors. The only recourse is to hopefully burn the carbon and lead by firing higher pressure rifle rounds in an attempt to burn them clean. The BANISH 30 makes this process easier as it is one of the few rifle suppressors that is completely user serviceable and it can be easily taken apart for service and cleaning and goes back together with no difficulty.

The disassembly factor also allows the shooter to run the BANISH 30 in a short 7” length for ease of portability and maneuverability on your AR-15 or the 9” length for a much quieter level in sound reduction.

One of the quietest AR-15 suppressors we have tried recently is the Elite Iron Delta. Known mostly for their larger bore silencers in 338 Lapua Magnum and 50 BMG (Browning Machine Gun), the Elite Iron Delta was designed with smaller diameter bores in mind.

On an AR-15 the Elite Iron Delta may be a bit heavy, but it is also extremely quiet.

The company has recently revamped some of their lineup with regard to .223 caliber suppressors and has some QD and lighter weight offerings. However, we have not verified the metered dB levels as we have with the direct thread version.

When it comes to a 223 Remington suppressor, we think mostly of the rifles chambered in that caliber and they tend to be bolt-action hunting rifles. For those reasons, a direct-thread suppressor is one of the better options. A bolt-action will always be quieter by nature than any semi-automatic rifle due to the completely closed action. There is no gas vented through the ejection port and absolutely no noise created by the cycling of the bolt. For shooters who hang on decibel numbers, those variables will generate false readings when a suppressor is metered for sound. So we took a look at the 223 XDS Coastal Guns suppressor and chose it for this category, but don’t worry – this suppressor can work extremely well on an AR-15.

This is a heavy duty suppressor with regard to performance and physical size. It tips the scales at 28 ounces and, while that may not be what you want on a lightweight short barreled entry carbine, it is perfect for a hunter or shooter who primarily shoots from a supported position at long range using an AR-15 or bolt action rifle.

The Thunder Beast Arms Corporation’s (TBAC) 556 TAKE DOWN was designed around the 2017 USSOCOM Suppressor Upper Receiver Group (SURG) solicitation from US Special operations Command (SOCOM). This is one of the most rigorous suppressor tests in the world, if not the most rigorous.

This is a user-serviceable suppressor and it can be disassembled for cleaning. The 556 TAKE DOWN was engineered to be disassembled from the front of the suppressor, so if it is permanently attached to a 10” barrel, the shooter will not run afoul of NFA regulations regarding a short-barreled rifle.

We have found this to be a rugged and effective suppressor, particularly when mounted on a short-barreled rifle or machine gun. 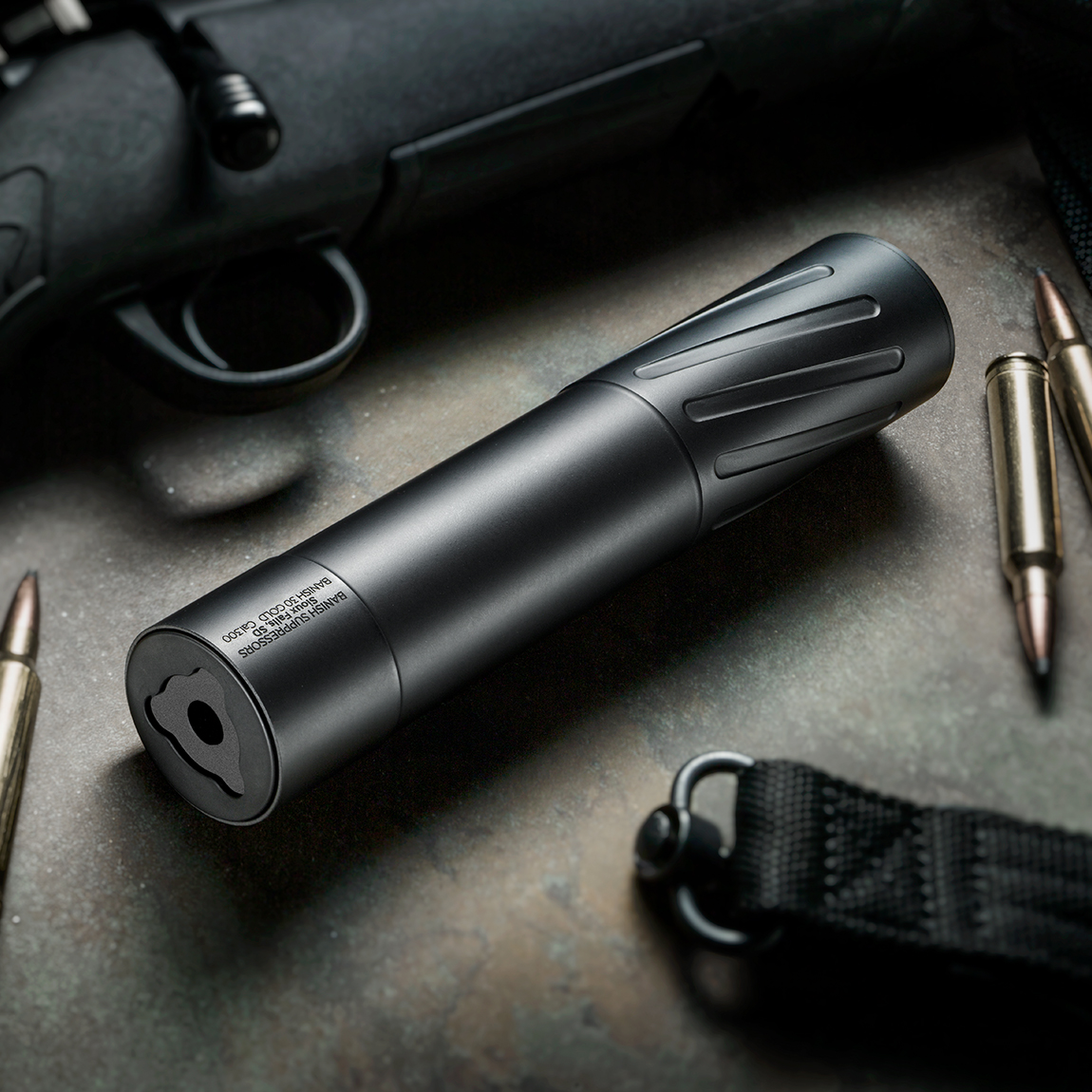 When looking at all the choices and scouting the top tier, it comes down to versatility. We found one in that category that can handle everything from 22 rimfire up to 300 Remington Ultra Magnum (300 RUM) in the BANISH 30 Gold.

Like it’s other brothers in the BANISH family, the BANISH-30 Gold can be disassembled for service and cleaning and it goes back together with no difficulty. Unlike the BANISH 30 it uses a quick detach muzzle brake and ships with a premium accessories package including two muzzle brakes: one in ½ x 28 for use on your AR-15 and one in 5/8 x 24 to mount on your .30 caliber rifle of choice. As mentioned previously, this is a desirable feature because it puts the brunt of the muzzle blast on the brake as opposed to the baffles.

How to Pick the Right AR-15 Suppressor for You

As we stated earlier, the best AR-15 suppressor can mean a lot of different things based on the shooter’s needs and the rifle’s specifications.

Always remember, it’s your rifle and your needs that will dictate which AR-15 suppressor is the best for you. A longer barreled AR-15 (20”-24”) will always be quieter than a shorter barreled rifle (10.5” to 16”). Every shooter needs to assess what is more important based on their own equipment.

If you own a lot of firearms besides an AR-15, you will want a suppressor that can not only be readily used on a full-sized AR-15 or braced pistol, but one that can handle different rounds from rimfire magnum cartridges possibly up to 300 Blackout or even .30 caliber Magnum rounds like 300 Winchester Magnum or 300 RUM. In those cases a dedicated .223 caliber suppressor will not be up to the task, nor will a unit that is completely sealed if you are a high volume rimfire shooter with that kind of suppressor.

Aside from your specific needs, versatility with regard to mounting and calibers is important in the suppressed realm of shooting. Tax stamp cost aside, who wants to wait for multiple suppressors when one can handle most of your needs? The double edged sword there can come down to proprietary mounting systems. One suppressor at $600 and a $200 tax stamp can seem cheap if you need 11 different mounts at $150 apiece.

Each of these AR-15 suppressors is the best in their own right. Some we prefer for our more accurate AR-15s and others we like to mount on our shorter barreled rifles and machine guns. If we had to choose one from this list, we would have to go with the BANISH 30 as the overall winner.

If you’re prairie dog or coyote hunting, you can run it in the long configuration. For a defensive rifle on the ranch we can shorten it. When it gets so dirty that it needs a thorough cleaning, it can be cleaned in the garage and has no need to be sent to the manufacturer for armory level maintenance. It is equally at home on a 308 Winchester as it is on a 5.56 AR-15. It literally checks off all the boxes on our list of what makes for the best AR-15 suppressor.