Firearms
What on Earth Does “Any Other Weapon” Mean?
October 21, 2020 By Brandon Maddox

What on Earth Does “Any Other Weapon” Mean?

There are many different terms and legal classifications in the firearms industry.

You’ve heard about machine guns. You know what a short-barreled shotgun is. You understand silencers. But what about “Any Other Weapons,” a legal term that is used to describe a variety of unique firearms?

Often called “AOWs,” these interesting firearms have a special classification; to own one you need to go through a specific process.

But first, you need to understand what they are and how they are defined by the United States government.

What’s the Definition of “Any Other Weapon”?

“Any other weapon” is an umbrella term used to describe firearms that are not exactly rifles, shotguns, or handguns, but something else entirely; something so unique and hard to define that it may not fall into the specific categories that most people understand.

The term comes from the National Firearms Act, a piece of legislation from the 1930s that brought a variety of regulations and taxes to the firearms industry. The Bureau of Alcohol, Tobacco, Firearms, and Explosives (ATF) does the best job of defining the term. On their website, “Any Other Weapon” is described as any concealable device capable of discharging a projectile through the use of an explosion, excluding pistols and weapons intended to be fired from the shoulder.

In essence, an AOW is something that fires ammunition but does not fall into the category of handgun, rifle, or shotgun. 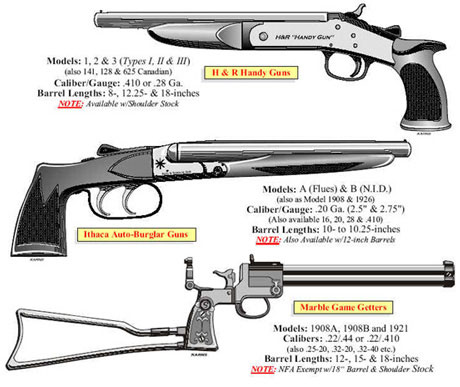 Shotguns are probably the most common “any other weapon” you will see in use. Visually, they look like small shotguns and can be mistaken for short-barrel shotguns. Legally speaking, however, they are not shotguns, but merely an AOW that fires shotgun shells.

One of the main distinctions for AOWs is that they are concealable, but there is an important legal difference between an AOW and a sawed-off shotgun; a distinction that has major implications for your personal freedom.

An AOW shotgun is a firearm that is originally manufactured and assembled with an extremely short barrel. Usually pump-action, these weapons have smooth-bore barrels (no internal rifling) between 12 and 18 inches long. They can be chambered for different gauges, but are usually made for 12-gauge shells. Like other shotguns, they can fire pellets, buckshot, or slugs, and can obviously deliver a high amount of damage to the target. With such a short barrel, however, range is an issue, as slugs will fly off target and pellets will have a wide pattern.

A shotgun with a short barrel and stock removed is not an AOW. This is a sawed-off shotgun, or short-barreled shotgun. They are highly regulated and in many cases illegal to own. Arguably, there is little physical difference between an AOW shotgun and a sawed-off shotgun. Legally, there is a major difference. It may seem trivial, but although you can own an AOW, you cannot take your semi-automatic bird gun and turn it into a short, concealable weapon.

For pistols, there are a few situations where the weapon will be classified as an AOW. If a pistol or revolver has been modified to fire shotgun shells through a smoothbore barrel, it would fall under the classification of an AOW. This seems like a fairly rare situation, however. More common would be the use of pistol grips…

Many pistols have mounting accessories that allow owners to attach scopes, flashlights, additional sights, and other accessories. It’s also possible to use these mounts to attach vertical grips. If you do, you have created an AOW pistol and it will need to be registered as such.

Essentially, pistols are legally classified as weapons meant to be used in one hand (good technique calls for both hands, but, again, we’re talking about government rules). By adding an additional grip, you have made the handgun into a weapon that is now intended to be held with both hands, which would then classify the weapon as an AOW. So if you decide to mount a vertical grip, you would have to register the firearm as an AOW.

There are also weapons that, while capable of firing ammunition cartridges of various types, do not look anything like a traditional firearm. These, almost exclusively, fall into the ATF’s category of an AOW.

Any device (outside of typical long guns and handguns) that fires a projectile through the use of an internal explosion can be considered an AOW. For example, a cane gun, a device that looks like a cane but can fire a small-caliber cartridge, is a type of AOW. Likewise, a wallet gun or a small-caliber gun disguised as a pen would fall under this distinction.

Although far less common today, combination rifle and shotgun weapons with barrels between 12 and 18 inches are considered AOWs. Combination weapons used to be sold as hunting and varmint tools, although they are usually more of an antique novelty piece nowadays.

How did the Term “Any Other Weapon” Come to Be?

The term “Any Other Weapon” traces its origins to the National Firearms Act of the 1930s Usually called the “NFA,” this act made a wide variety of legal regulations and requirements for firearms, and provided for the taxation of handguns, pistols, and shotguns. It mandated the registration of certain firearms and allowed the government to collect a tax on the manufacture and transfer of these arms.

Part of the NFA included the restriction and regulation of certain firearms, which have been titled “NFA firearms” or “Title II weapons.” The NFA is enforced by the Bureau of Alcohol, Tobacco, Firearms, and Explosives, usually called the “ATF.”

Essentially, the NFA has specific titles for a variety of weapons and firearm accessories. These categories include machine guns, short-barrel shotguns, silencers, and destructive devices. However, they also included the catch-all category of “Any Other Weapon,” which was basically an attempt to avoid loopholes in the other, more-specific, categories.

AOW Tax Stamps – How to Legally Obtain an AOW

There are two ways that you can legally own an AOW. The first and easiest way is to purchase one. The other way is to make one yourself by modifying the weapons you currently own. However, modifying a weapon is fraught with legal pitfalls; unless you are well-versed in firearms law, it’s probably best to purchase an AOW from a legal dealer.

To make a purchase, you need to find a dealer or manufacturer who can legally sell you one, then fill out all the necessary paperwork, which the dealer should be able to provide. You’ll need to fill out specific forms, and you may even need to go through fingerprinting with your local police station or sheriff’s office.

For certain NFT weapons (machine guns, short-barrel shotguns, etc), there is a $200 tax that needs to be paid before the weapon can be transferred. For AOWs, however, there is only a $5 transfer tax.

Be aware, however, that certain states completely restrict the purchase or use of AOWs, so you will need to be sure that these items are even legal in your area before making a purchase.

How do I Know if I Need an AOW Tax Stamp?

While the legal definitions can be rather tricky, for the most part, it’s easy to know if you need an AOW tax stamp or not.

Once a weapon is given a distinction, it always has that distinction; if adjustments are made that change the distinction, you will likely need to pay the tax and register the weapon as an AOW.

Once you have selected the weapon you want to purchase and paid for the firearm, you will need to fill out an ATF form and submit your application, which will register your AOW in your name. You will then need to pay the tax stamp fee of $5.

The next step is simply to wait.

AOW: The Oddball of ATF Classifications

To be certain, the AOW is the oddball of ATF classifications. It’s essentially the catch-all category used to specify, regulate, and track unique weapons that don’t fall into the neat categories outlined in the NFA.

They are unique, interesting, and great conversation starters among firearm enthusiasts. They can also be effective tools for home and personal defense, but like all weapons and firearms, you are responsible for ensuring you own and use them in a legal, safe, and responsible manner.

If you are interested in excellent accessories for your firearms, try top-quality products from Silencer Central. With world-class suppressors for a range of pistols, rifles, and shotguns, we can help improve your next hunting or target-shooting experience.

Female Gun Ownership is on the Rise in the US