The only thing better than spending some time plinking with a .22 is doing it while using a suppressor.

In this article, we’ll take a look at two of them – our Banish 22 and the SilencerCo Sparrow – and give you a head-to-head comparison of each. Below are the different categories we’ll cover.

How do the Banish 22 and SilencerCo Sparrow Compare?

While the overall goal of all suppressors is the same, not all of them are made alike. The same is true for the Banish 22 and the SilencerCo Sparrow. They’re similar in construction, durability, user-serviceability, and price, but they’ve got differences when it comes to sound reduction and design.

The table below gives you a quick overview of how they compare, and each section below the table gives a more thorough explanation of the comparison.

A standard BB gun has a sound report of about 110 decibels, which is essentially what most would consider being “Hollywood quiet.”

Testing with the Banish 22 shows that it brings down the report of a shot down to 113 decibels, or barely more than a BB gun.

Tests for the Sparrow show that the report is brought down to 112 decibels, which is also just a tiny amount louder than a BB gun.

As you’ll see below, the inner workings of these two suppressors are different. This is important for many reasons, one of which is the first-round pop. You’ll notice that more with the Sparrow than with the Banish because of their designs.

Aside from the first-round pop, these two suppressors do fantastic jobs reducing sound. With just one decibel of difference between the two, it’s pretty much a draw here. The likelihood that you or I could tell the difference of one decibel is highly unlikely.

We designed the Banish 22 to maximize your time shooting and minimize your time cleaning. Inside the tube are eight baffles that are engineered for a precise fit to keep lead debris and carbon buildup at an absolute minimum. This prevents the debris and buildup from reaching the tube, which causes components to fuse together. Being able to remove and clean individual baffles means that you can get your suppressor as clean as possible. 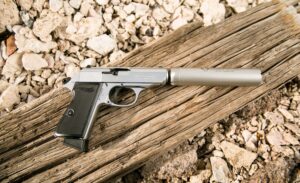 According to SilencerCo, the design for the Sparrow was created “with simplicity, durability, and user serviceability as its core objectives.” Inside is a monolithic core baffle covered with two half tubes that cover and separate it from the outer tube. This design helps the core stay as clean as possible to prevent buildup or fusion. It’s important to note, however, that while the core may be a convenient one-piece design, it’s harder to clean in all the nooks and crannies than separate baffles.

Suppressors are made from a variety of materials these days. There are steel, aluminum, titanium, and even 3D-printed options available. However, not all materials are made alike, and some perform better than others.

The Banish 22 is made entirely of titanium. That is, both the tube and the eight individual baffles are all made from it. While the baffles are left bright, the tube is finished in Gun Kote.

The SilencerCo Sparrow is made entirely of stainless steel. Inside the tube are two half tubes that cover a monolithic core. The tube has a black oxide finish.

Both metals are durable, but titanium has a better durability-to-weight ratio, is less prone to wear, and is easier to clean in an ultrasonic cleaner.

Aside from sound, size and weight are two of the most important aspects of a suppressor. Especially when you’re dealing with small calibers like the .22, you really want your suppressor to be something that practically goes unnoticed on the end of your muzzle. 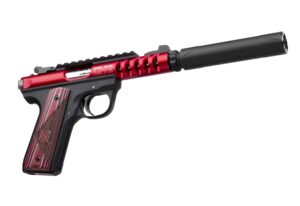 The Sparrow is the shorter of the two, but it’s also bigger in diameter and weighs more.

While the difference between the two is “only” 2.4 ounces, that really does add up on a rimfire gun. Both rimfire pistols and rifles tend to be smaller and lighter than their centerfire cousins, and you’ll definitely notice the weight difference as time goes on – especially on a lightweight pistol.

If a suppressor isn’t durable, then none of the other qualities it might possess really matter. What good is a quiet or lightweight can if it’s going to fall apart after only a few uses? Luckily, both of these suppressors are built for longevity.

Both options can be used on calibers as small as .17WSM and .17HMR and up to the 5.7x28mm cartridge. As an extra bonus, both are rated for full-auto fire, so go ahead and send it!

Both of these suppressors are user-serviceable. This means that they can be completely disassembled for cleaning and other maintenance needs that may arise.

Since rimfire ammo is notoriously dirty, the ability to completely disassemble these two suppressors is a big plus. Instead of using solvents or foams and hoping that you get all the nooks and crannies clean inside a sealed suppressor, both the Banish 22 and the SilencerCo Sparrow can be taken completely apart so that you know you got all the nooks and crannies clean.

Of course, remember that you also have to factor in the $200 tax stamp on top of the cost of the suppressor. The prices listed above do not include the stamp.

Which .22 Caliber Suppressor Comes Out on Top?

As you can see, both the Banish 22 and the SilencerCo Sparrow have areas where they come out on top. You just have to figure out which areas you’re willing to make sacrifices in favor of other benefits. Either way, though, you’re going to be the one coming out on top regardless of which suppressor you choose because they’re both great options.

If you’re still having a hard time deciding, give us a call. Our sales staff spend all day every day making recommendations on the best suppressors for different applications. Then, when you’re ready to buy, let us walk you through the entire process and then deliver your suppressor right to your front door!

Designed for rimfire rifles and pistols, .22 caliber and smaller (including .22 Hornet).

How Much Does a Suppressor Cost?

FREE TAX STAMP - THIS MONTH ONLY

To celebrate Silencer Central being named to the Inc 5000 fastest growing business in America we are passing the celebration on to you with a FREE TAX stamp on qualified purchases.

Call today to take advantage of our limited-time offer.