BANISH 45: A Multi-Caliber Suppressor for Every Gun

Here at BANISH Suppressors, we take pride in our extensive line of multi-caliber silencers. “The one for any gun” isn’t just a clever slogan, it is a fact and something designed into each of our suppressors.

Our BANISH 45 is a unique, modular suppressor that will handle everything from .22 rimfire to .45 ACP and a whole lot of everything else in between.

When we set out on our journey to build a handgun silencer worthy of the BANISH name, we knew it couldn’t just be a single caliber-specific silencer. We wanted a handgun silencer you could use on your favorite .22 plinker, your .45 nightstand gun, or your tricked out 10mm hog hunting pistol.

The BANISH 45 is designed to be fully user-serviceable and configurable. By changing the length, it can be made to a short 6-11/16” configuration, and is rated for all common semi auto pistol cartridges through .45 caliber, plus subsonic .300 Blackout!

Nobody has made a multi-caliber, lightweight, modular, user-serviceable titanium suppressor like BANISH Suppressor has.

The BANISH 45 is rated for .22 rimfire through .45 ACP and will handle the hard-hitting 10mm and even subsonic .300 Blackout rounds, living up to our motto of “The one for any gun.”

We think the BANISH 45 is the best 10mm suppressor you can buy right now. The 10mm round is seeing an amazing resurgence not only as a tactical and personal defense round, but also as a hunting cartridge. A number of different handguns and carbines are available for most any budget, and they are taking the hunting world by storm.

Naturally, a 10mm hunting pistol needs a light, easy-to-use and modular suppressor, and the BANISH 45 is just that. Like all BANISH models, the BANISH 45 is designed with hunters and sport shooters in mind, and is intended to be readily transferred between many different guns. 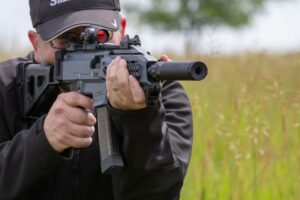 Because 9mm is a supersonic pistol round, suppressing it has always been a bigger challenge than suppressing the subsonic .45 ACP round. Building a multi-caliber handgun suppressor meant we had to solve the technical issues of suppressing 9mm, while still creating a suppressor that worked for many other handgun calibers.

The Ultimate Suppressor for 3 Gun Shooting

Three gun requires precision gear, precision movement, and even more, it requires quieter shooting. Three gun shooters who use suppressed guns enjoy a quieter shooting session, and reduced sound at the range leads to fewer noise complaints from those living in the area.

Try the BANISH 45 on your favorite three gun pistol, or even on a subsonic .300 Blackout AR style pistol or carbine – you’ll never want to use any other brand of suppressor!

From AR style pistols to an increasing number of bolt action and even single shot rifles, the .300 Blackout has become a popular .30 caliber round. A big part of that popularity is the ease with which it can be suppressed.

While we were building the BANISH 45, we figured it wouldn’t hurt to make sure it was rated for the subsonic .300 Blackout rounds that are proving so popular in modern pistols, and are perfect for some hunting applications. Sure, our number crunchers would like it if you bought a standalone .300 Blackout suppressor, but what’s the fun in that? One suppressor, one tax stamp, many guns; that’s what we are all about at BANISH.

It Works Great as a .45 Suppressor Too!

Of course the BANISH .45 works great on .45 ACP and similar pistol cartridges. The lightweight titanium and aluminum construction makes it a perfect companion to John Moses Browning’s brainchild, or any other .45 for that matter. Weighing just 9.6 ounces in the short configuration, the BANISH 45 is the lightest suppressor in its class.

You know a suppressor that can quiet down 9mm will really do the trick on the already subsonic .45. There is no better choice for a home defense pistol then the BANISH 45 and folks at the range will appreciate the quieter sound from your big .45.

For well over a decade, BANISH Suppressors have been pushing the envelope of silencer technology in order to create a user-friendly suppressor that ignores trends. We build suppressors for real world users who don’t need some guy with a tactical beard and a load bearing vest telling you that your suppressor will make you into an elite operator.

You’ll find BANISH suppressors on hunting rifles, competition guns, and pistols “quietly” tucked away in a nightstand in case of an emergency.

Fully user-serviceable, modular and adaptable to many different calibers and guns, the line of BANISH suppressors are the one for every gun and every person.

Buy online today, visit us a gun show near you or call us for help with your first or next silencer purchase. And remember, each BANISH suppressor comes with a total satisfaction guarantee and a free gun trust to make navigating the hassles of ATF paperwork straightforward and simple. Get started on your purchase!