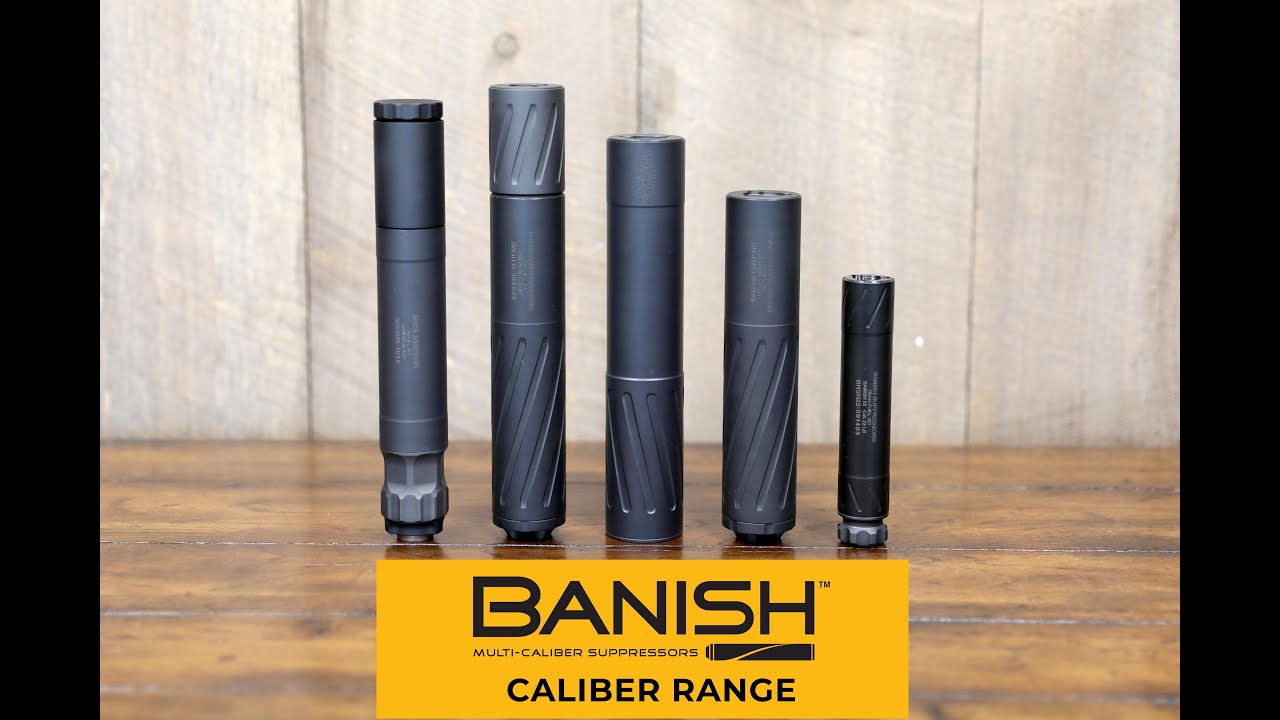 When you purchase a suppressor and take a look at your Form 4 with its National Firearms Act (NFA) tax stamp, you will notice box 4c lists “caliber or gauge.” This is a very important box for a number of reasons, as it lets the shooter know what diameter the suppressor is intended for in regard to the gun’s caliber size.

What do We Mean by Caliber Sizes?

This measurement may be given in inches or millimeters but for ammunition measurement purposes, the handgun or rifle’s caliber size will be often given in thousandths of an inch. For example, a 9mm handgun will fire 9mm ammunition but the bullet caliber size for that case will be 0.355” in diameter. People often confuse caliber for chambering.

The firearm’s chambering may be 9mm Parabellum (also known as 9mm Luger or 9x19mm) but there are also other 9mm cartridges known as 9x21mm, 9mm Makarov, or 9x18mm which will not chamber in the same firearm even though they share the same caliber size. The 9mm Makarov or 9x18mm actually uses a slightly wider bullet caliber size measuring 0.365” instead of 0.355” to further confuse things. 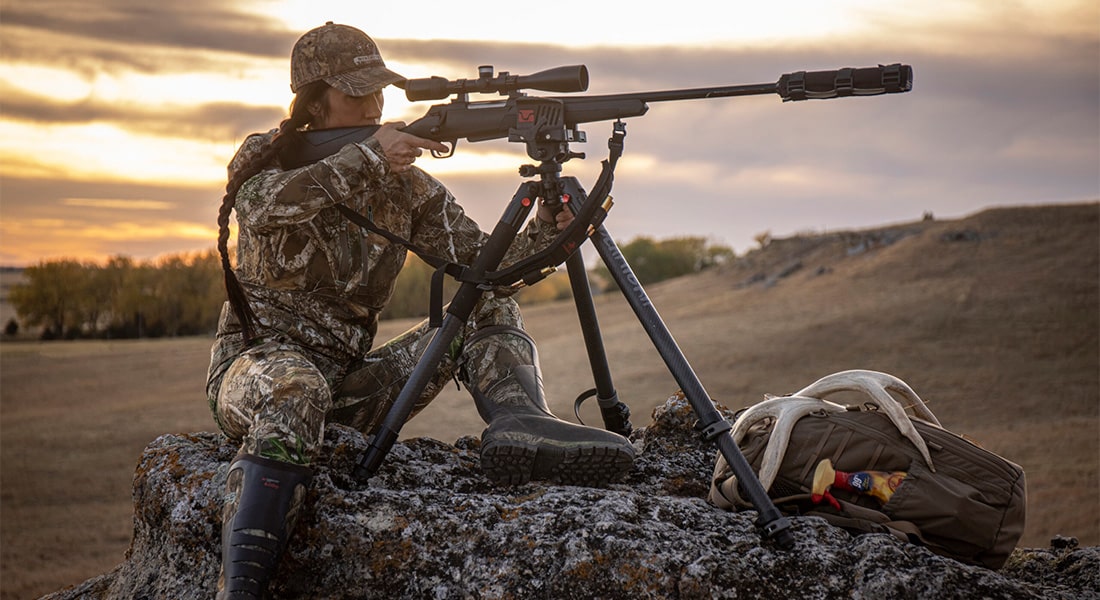 It is therefore important for the buyer of a suppressor to understand what these mean and more importantly not to get hung up on bullet caliber sizes.

The most common round in the United States (except when panic buying is in full gear) is the lowly 22 long rifle. Its name can be a source of confusion to novices, as it is called “long rifle” yet can be fired through pistols and revolvers, as well as rifles. Due to its small size, availability, and low noise signature it is often the first caliber for most shooters, and probably the most useful and least expensive.

22 long rifle is what’s known as a rimfire cartridge. This means that during the firing sequence, a striker or firing pin impacts the rim of the cartridge instead of a primer to ignite the powder in the case. You may see reference to rimfire suppressors and these are ideal for use with 22 long rifle. Over the past 10 years, most rimfire suppressors will handle rimfire magnum length cartridges as well such as 22 Winchester Magnum Rimfire (22 WMR) or 17 HMR (Hornady Magnum Rimfire). A few can even handle .22 caliber centerfire rounds on the smaller side such as 5.7x28mm, 22 TCM or 22 Hornet.

Not going up in caliber size but definitely in power is the .308 rifle caliber. Sometimes this may appear on paperwork as simply .30 caliber. In general, the bulk of .30 caliber suppressors are intended for use on rifles chambered in 308 Winchester or 7.62 NATO. By default, they will handle everything that a .223 caliber rifle silencer can handle with the addition of 300 Blackout in supersonic and subsonic loads and .30 caliber rifle cartridges with lower pressures, such as 30-30 Winchester and 7.62 x 39. Usually, rifle calibers with smaller diameters such as 270 Winchester, 6.5 Creedmoor, or 6.5 Grendel can be fired safely.

However, as we have seen with some of these other modern suppressors, thresholds can be higher. Many .308 caliber rifle suppressors are actually rated for 300 Winchester Magnum, 300 Weatherby Magnum and even 300 Remington Ultra Magnum. It is of extreme importance to determine if a suppressor will tolerate rifle calibers such as these before they are fired.

Another caliber increasing in popularity for the long-range shooter is the .338” rifle caliber size. Typically regarded as the Cadillac of any line of suppressors, these models were built for the mighty 338 Lapua Magnum or 338 Federal and can handle any rifle caliber size with a smaller diameter from 17 Remington up through all the belted Magnum rifle calibers as long as the bullet diameter does not exceed 0.338 inches or 8.6mm. 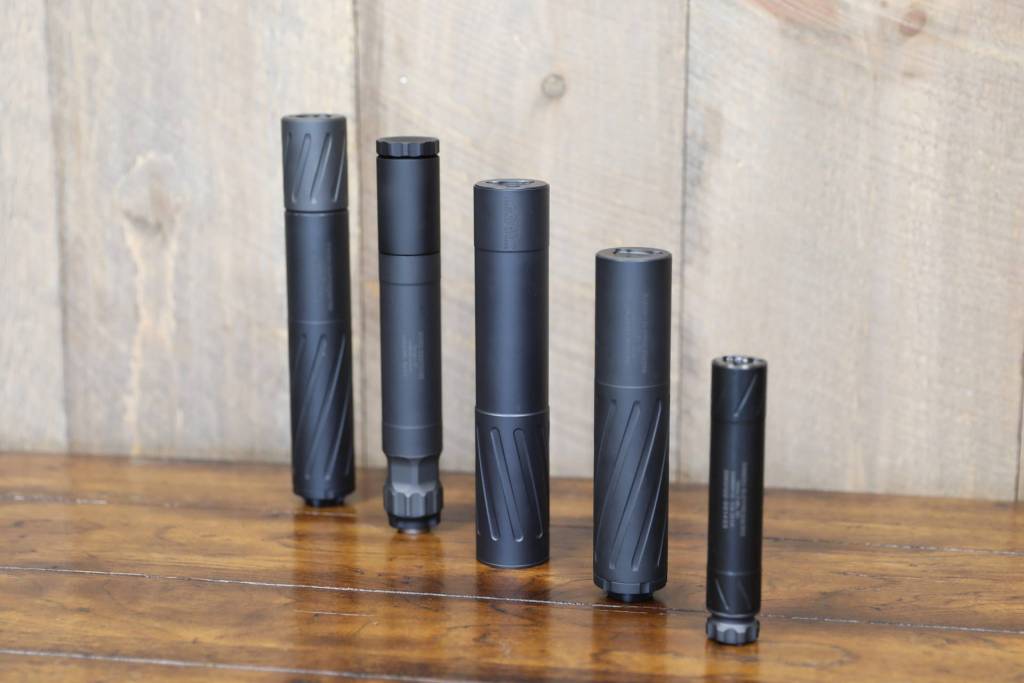 One of the most popular pistol caliber sizes is 9mm. The caliber of this, if measured in inches, would be .357. It goes without saying that a suppressor in this diameter can safely fire 9mm, 380 ACP and 38 Special.

That last few may sound odd, because the name of the cartridge sounds larger than 9mm or a pistol caliber size of 0.357”. Despite the names of the cartridges or pistols, the caliber of a 38 Special cartridge or 38 Super measures at .357”. The 38 designation comes from the outside diameter of the loaded cartridge. This goes back to the latter part of the 19th Century when gunsmiths converted black powder cap and ball revolvers to a pistol caliber which used a heeled bullet that had the same diameter as the loaded round. So, when the 38 Colt was lengthened to become 38 S&W Special, they kept the “38” moniker for familiarity. The 380 ACP has a similar origin in that it evolved from the now obsolete pistol caliber 38 ACP and the cartridge name came from the outside diameter of the round measured at the neck.

Most 9mm suppressors can handle rifle caliber sizes like 300 Blackout, 300 Whisper and 350 Legend in subsonic loads because the pressures are much lower. Some of the better-made ones will handle 357 Magnum or even 35 Remington because they are the same caliber size. It is advised to consult the manufacturer before trying these rounds to protect the shooter as well as the suppressor and ensure that it’s safe to fire these types of rounds.

Another popular pistol caliber is the .45 caliber. As you could imagine, .45 caliber suppressors are intended for pistols chambered in 45 ACP. Many will handle smaller pistol calibers such as 9mm, 38 Special, 40 S&W and 44 Special as well as the 300 Blackout or 350 Legend in subsonic form. Certain .45 caliber suppressors can tame the 10mm, 44 Magnum, or hotter 45 Colt loads, but this should be confirmed with the manufacturer.

If the .45 caliber pistol silencer is an older model it may not be able to withstand a steady diet of 9mm supersonic rounds. In general, 45 ACP is a subsonic round and 9mm is not. 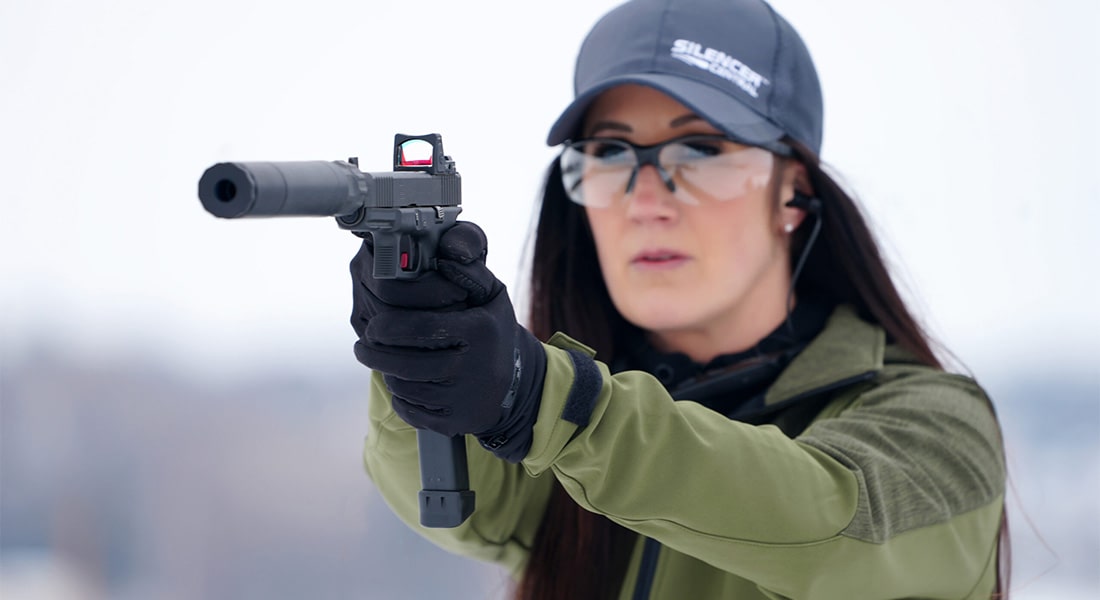 There are a handful of other .45 caliber suppressors intended for use on .45 caliber rifles that are much more powerful than a pistol caliber round such as 45 ACP. Sometimes the caliber designation may read .458 or .454 instead of .45 caliber. These suppressors are made for rifle calibers such as 450 Marlin, 458 SOCCOM and 45-70 Government. Additionally, there are a few special use suppressors where the caliber designation is .50”. These are intended for use on 50 BMG rifles and anything smaller in diameter. While one of these suppressors might seem as if they can perform well on everything you own with a threaded barrel, their size often makes them less than ideal for a lot of smaller caliber firearms such as a rimfire rifle, for instance.

Choosing the Right Suppressor for the Caliber Size

Yet there are a lot of shooters who have a wider spectrum of rifle and pistol calibers and the funny thing about shooting suppressors and seeing their effectiveness is that eventually, a shooter will want to suppress every firearm they own, regardless of caliber size.

If suppressors were more easily obtainable or did not come with a $200 tax stamp involved with the purchase, most folks would simply buy a rifle or pistol suppressor of the caliber sizes that they need and call it a day. Unfortunately, that is not currently the case in America.

The .308 caliber sized suppressor will work on 5.56 caliber rifles and other cartridges such as 30-30 Winchester or 243 Winchester. A modern quality .45 caliber pistol sized suppressor will handle 45 ACP, 9mm and even subsonic 300 Blackout. Some shooters have tried bigger suppressors intended for larger .50 caliber rifles on all their firearms, but as we mentioned earlier they are often a bit unwieldy or too weighty to use on some rifles as well as most pistols.

For a truly diverse pistol caliber suppressor, we recommend the BANISH 45. This is a modular suppressor in .45 caliber that uses different pistons based on the thread pattern of the host firearm. It can handle everything from rimfire to 45 ACP including subsonic 300 Blackout.

Always remember that while the gun caliber size is important when buying a suppressor, it is equally important to consult the manufacturer with regard to the power threshold, especially when it comes to rifle caliber suppressors. Some suppressors may be fine for certain calibers with regard to rifles, but there may be minimum barrel lengths as considerations.

A number of manufacturers give a minimum barrel requirement of 10.5” with rifle calibers such as 5.56 NATO or 308 Winchester because the excessive blast and flash signature can cause premature wear on the baffles of the silencer, regardless of caliber.

The Banish 338 is the quietest and most compact .338 suppressor. Made with titanium and Inconel the Banish 338 weighs only 17.5oz.

Choosing Stellite vs Inconel for Your Silencer Baffles