The whole purpose of concealed carry is to prevent people from knowing that you’re carrying a gun, right? I mean, it’s the first word in the phrase!

For anyone who has ever strapped on their holster, secured their gun in it, gotten dressed like normal, and gone about their daily life, they’ve probably had this experience: your gun is printing. Printing describes being able to see the gun-shaped item under your clothing, and it’s not a good thing. Just because your gun is covered by an article of clothing doesn’t mean that it’s concealed.

The good news is that the vast majority of the population is too self-absorbed to ever notice that you’re carrying a gun, regardless of whether or not you’re printing. However, fellow concealed carriers might spot your gun. In fact, it’s a fun game I like to play when out and about – and you’d be surprised how often I win, even though for their sake I wish I didn’t.

So, without further ado, let’s take a look at some ways you can dress for concealed carry success. Follow these tips and you’ll be well on your way to making sure I lose the game if and when we meet!

Properly concealing your weapon is extremely important. Here are a few things to take into consideration when deciding the best way for you to do it.

Other states, though, aren’t as lax. In some instances, if your cover garment rides up and exposes the gun to any degree, they consider that to be brandishing the gun, which would be the same as taking it out of the holster and waving it around. And I think it goes without saying that brandishing comes with serious legal consequences, so you don’t want to accidentally run afoul of something like that simply because your shirt rode up when you reached for the cereal on the top shelf of the grocery store.

Dress Around the Gun

While it is absolutely possible to maintain your personal style while carrying a gun, you have to come to terms with the fact that you are most likely going to have to dress around the gun, and not the other way around.

This may mean buying your favorite jeans with a waist size that’s a couple of inches bigger or switching to a large shirt versus a medium. Your style is still there; only the tag has changed.

Dressing Warm with Your Weapon

Colder weather is often welcomed with open arms by those who carry concealed. Layers of clothing and big coats make it easier to conceal firearms in ways that might not be possible when wearing less clothing. Here are some options for carrying while keeping warm.

An OWB holster is exactly what it sounds like: it attaches to your belt and is worn on the outside of your pants. This has one major benefit and one major drawback. The benefit is that you don’t need to buy bigger pants to accommodate the gun; the drawback is that the gun sticks out more from your body.

In colder weather, however, the drawback is less of an issue. When paired with a winter jacket or a thick, flannel shirt, most OWB holsters tend to visually disappear from the wearer’s midline.

While extra layers for warmth provide better concealment, they can also provide obstacles for ease of access. That’s why a number of companies make clothing with built-in holsters. 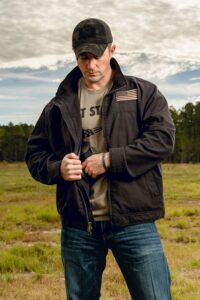 Whether you need a heavy-duty work jacket for use on the construction site or a nice leather coat with a warm liner, there are options out there just for concealed carriers. These coats and jackets were purpose-built with guns in mind. The holsters and/or carry compartments were designed to be located in areas where a majority of people carry their guns and in positions that make drawing the gun as easy as possible.

Some people switch up their method of carrying when the weather changes from hot to cold. For some people, though, the weather is rarely – if ever – cold where they live, and they need to keep cool and carry on all year long.

Carrying a gun in a holster in your pants pocket or on your ankle is an easy, relatively unobtrusive way to do so that won’t add extra layers of clothing when you’re trying to keep cool. Pocket carry can be done with any type of pants or shorts provided that you have a good belt, and ankle carry can be accomplished with any type of pants provided that the leg opening is large enough to fit over the gun.

The drawbacks to this type of carrying include the size of the gun and ease of draw. A gun in your pocket or on your ankle is going to have to be smaller than one on your hip. This often translates into smaller calibers and lower round capacity. Additionally, drawing from a pocket can be hard to do while seated, and drawing from your ankle requires extra steps, too.

Keep It Easy and Breezy

Loose-fitting clothing allows for better breathability, which means it’s easier for you to stay cool while wearing it. It also means there’s more lightweight fabric to conceal your gun. An untucked, casual short-sleeve button-down shirt is a perfect example. When paired with the right holster, you can easily carry your gun OWB while not worrying about overheating.

Conceal Your Weapon with Comfort

Do some experimenting with different cover garments and holsters and find what works best for you. As long as you’re in compliance with the law, there is no right or wrong way to carry concealed.

At the end of the day, the way you choose to dress and carry has to be comfortable no matter what the temperature. It is an absolute fact that if your setup is too hot, too cold, or too uncomfortable, then you’re not going to carry your gun.

How Long Does Ammunition Last?

How To Set Up an NFA Trust

What Do Concealed Carry Statistics Tell Us?