Elk Anatomy: Where to Aim for Lethal Shots

Elk Anatomy: Where to Aim for Lethal Shots

Hunting elk is one of the most intense, demanding tasks you can take on. They are as intelligent as they are intimidating, and tracking one down can take days of stalking through the woods, battling the elements, and a whole lot of patience. Once you finally find yourself face-to-face with one, the nerves and adrenaline can get in your head. You’ve got the opportunity — now it’s time to take the shot.

After all the work of tracking the elk, you want to be certain you’re getting a clean, effective shot. Knowing where to shoot an elk depends on a few different factors — read on so that you are ready when that once-in-a-lifetime opportunity comes around!

As with hunting any other big game animal, aiming for an elk’s vitals provides you with the best chance of getting a clean kill, while also killing the elk as quickly and humanely as you realistically can. The “vitals” refer to the vital organs of the animal, which are the lungs and the heart.

Check out the elk vitals diagram below for a better look at where the vital organs are located. 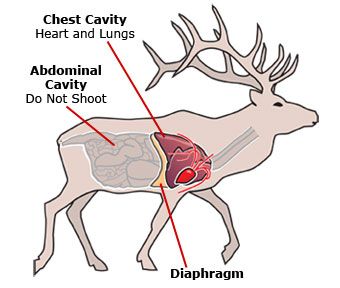 On an elk, the lungs are the largest target, and they are located behind the shoulders of the animal. The heart is tucked between the lungs and towards the bottom of the body, and it is a smaller (albeit more lethal) target to aim for. Both the respiratory and circulatory systems of the elk are run behind the shoulder, meaning that the body can’t last long if this area gets damaged. This is the elk’s kill zone.

Despite how large of a creature an elk is, the elk kill zone is rather small in proportion to the rest of its body measurement. It’s not that the creature’s vitals are small — it’s because of how well they are protected.

An elk has one of the most massive physical frames found in nature. Their bodies are layered with a hide, muscles and bones that are thick, dense and strong beyond belief. All of these layers of protection make it difficult for your bullet or arrow to get to the vitals cleanly, meaning that you don’t have a lot of room for error.

Because of these factors, there are two effective and efficient positions the elk can stand in that will give you the best chance of a clean kill: when the elk is broadside and when it’s quartering away from you.

Where to Shoot an Elk with a Bow

Before you plan on shooting an elk with a bow, it’s important that you understand how an arrow kills an animal, because it’s much different than a bullet. A bullet hits an animal at a rapid velocity, which can put the animal’s body in shock, cause more destruction and do more damage to the animal.

An arrow, on the other hand, does not do the repercussive damage that a bullet does. Arrows pierce the animal, and as the arrow tears skin, muscle tissue and organs, the animal’s body will begin to bleed out from there. In simpler terms, when you’re shooting an arrow rather than a bullet, hitting the animal in the vitals is absolutely crucial. 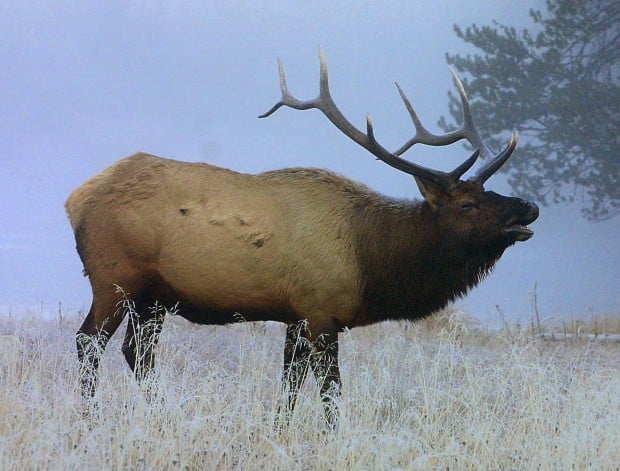 When you have the animal standing broadside, you’ll have the best chance at a vital organ shot placement, as your target is as big as it could be. You’ll want to place your pins behind the shoulder blade of the elk — this will give you the best chance of your arrow passing through bones and penetrating the vitals, which should hopefully lead to a clean, quick, and humane kill.

While it isn’t as desirable of a shot as a broadside shot, a good quartering away shot offers you just as much of an opportunity for a quick kill — when executed properly, that is. A quartering away shot is when the elk is facing away from you, but at an angle where you still have a direct line to the backside of the vital region. 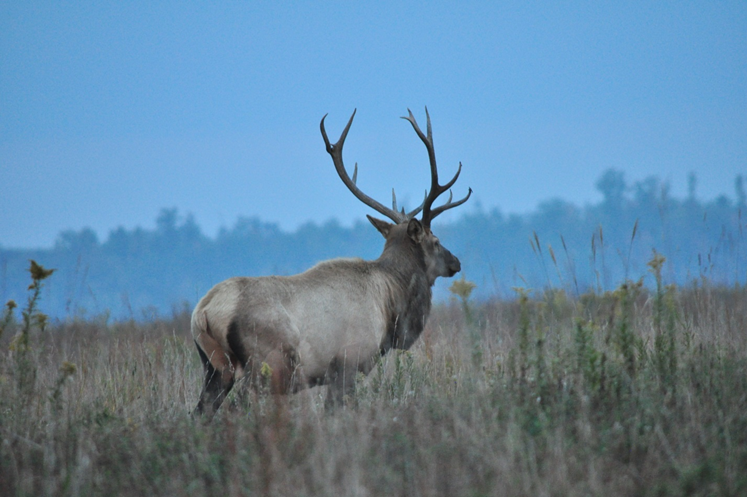 The success of your shot depends entirely on the angle at which the elk is facing away from you. Look for space on the elk between the back hip and front shoulder — the larger that margin, the better your shot. If you have the opportunity and feel confident in your ability as a marksman, then you’ll want to place the pin right behind the front shoulder so that it pierces the vital region. If successful, this arrow placement will penetrate the vitals and kill the animal swiftly and humanely.

Where to Shoot an Elk with a Rifle

When you hunt with a rifle, you increase your chances of success due to the nature of the weapon. As mentioned earlier, a bullet collides with an elk at such a rapid velocity that it immediately sends shock waves through the animal’s body. Bullets are designed to wreak havoc on their target after collision. Many of them explode within the target, sending shrapnel and destruction every which way.

However, hunting with a rifle doesn’t mean you’re guaranteed to be successful. The elk is a massive creature, and its framework offers you plenty of physical obstacles to get through. You have inches of hide, pounds of muscle tissue, and a shield of bones that will be keeping your bullet from the vitals. The only way to win this battle is with a good, clean shot.

When you do get the opportunity to shoot, your body will be pumping adrenaline through you, which can lead to shaky hands, anxiety, and errors. Even though you have a higher chance of success than an archery hunter, it doesn’t mean anything if you aren’t spending time in the offseason practicing, familiarizing yourself with your weapon and strategizing, so that when the moment is right, you’ll be ready.

A broadside shot is not only an archery hunter’s best friend — it’s the best shot that any big game hunter can take on any animal. As with an archery shot, you want to be sure to aim in that region right behind the front shoulder of the animal. Your bullet will have a better chance of breaking past bones than an arrow, but you still want to make sure you’ve got your sights on those vital organs. As always, be sure to pull the trigger while at the end of an exhale — this will give you a better chance of firing off a relaxed, steady shot.

An elk that is quartering away from you provides you with an opportunity, but you need to be confident in your ability and angle before you pull the trigger. Make sure that the elk is standing still so that you don’t misfire — you often only have one shot at an elk before the window of opportunity closes. Place your crosshairs in that region behind the front shoulder and in front of the back hip. If done correctly, you can penetrate multiple organs and possibly even get a double lung shot, which would drop the animal quickly.

Where to Avoid Shooting an Elk

One of the difficulties of getting a shot off is that there are plenty of places on the animal that you want to actively avoid when aiming. Due to the size and strength of the animal, the margin of error is pretty small. Elk are tough creatures and they can survive plenty of things that many animals can’t, including a poorly placed bullet or arrow.

The main area you should avoid is the hump-like area above the elk’s shoulders. This area is a combination of heaping muscle and thick, dense shoulder bones. An arrow or a bullet placed there would do little to no damage to the elk, and it certainly won’t kill it. While you definitely would rather aim too high than too low when aiming for the elk kill zone (it’s better to hit the elk and potentially slow it down rather than hit the ground underneath it), if you make contact this high up on the elk, it won’t be very effective. 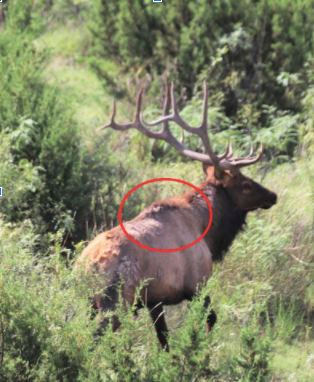 While it will slow the elk down, shooting it in the backside won’t do much in terms of killing the animal. You will likely maim it but this would require you to get in position for multiple shots. There’s no guarantee that you’ll be able to catch up to a paranoid elk in order to get another shot, so it’s better to keep your shot directed towards the aforementioned kill zone.

A shot that may be tempting is a frontal shot — when the elk is facing you directly. You may think that you could place a shot between its front legs and under the neck to reach the vital region, but in reality, it’s too small of a shot to make the risk worth the reward. This area is covered with the elk’s sternum, and unless you place a shot absolutely perfectly, it’s unlikely to do the damage that you’re hoping for.

Make a Quick and Humane Kill

Hunters have a mutual understanding that killing an animal as quickly and humanely as possible is the ethical way of going about hunting. Another ethical aspect of hunting is to not disturb the peace of nature. Not only will this help other hunters be successful, but it will keep the rest of the animals in the area calm, collected and undisturbed. A silencer from Silencer Central can keep your weapon quiet while helping it maintain (or even helping to improve) its original accuracy. Browse our selection of silencers today and find the right one for your upcoming elk hunt!