Everything to Know About the U.S. Ammo Shortage for 2022

If you want to exercise your right to bear arms, you can buy almost any type of gun you want in America. However, since 2021, hunters and other gun owners have had trouble finding ammo for their handguns and rifles.

Why is there an ammo shortage, and how much longer can it last? Keep reading to get answers, including when experts expect the bullet drought to end.

What Has Been Causing an Ammo Shortage?

Ammo shortages are not new in the U.S. We went through several between 2008 and 2016, and those shortages were due to panic buying and new laws. The current bullet shortage is due to ripple effects caused by the COVID-19 pandemic and other factors discussed below:

Gun buyers must undergo a background check when buying guns from a licensed firearms dealer. According to an FBI report, the background checks performed in 2020 and 2021 surpassed each previous year by over 10 million.

The increase in background checks implies that more people bought guns in 2020 and 2021 than in previous years. Note that this data does not cover people who got guns without undergoing a background check, such as through gifts and gun ownership transfers.

Remington has been one of the biggest gun and ammo manufacturers in the U.S since its founding in 1918. However, in 2018 and 2020, Remington filed for Chapter 11 bankruptcy protection. The bankruptcy proceedings led to losing investors and revenue, and the company could not keep up ammo production.

Remington’s paused production led to customers getting their ammo from other brands. Other ammo manufacturers gladly took Remington’s customers, but they struggled to cope with the sudden demand increase, contributing to the ammunition shortage. Fortunately, Vista Outdoors has acquired Remington, and the company is working on restoring and boosting ammo production in Remington facilities across the U.S.

Before the COVID-19 pandemic, shoppers could opt for imported ammo if they couldn’t get products from their favorite American brands. However, the ongoing pandemic has disrupted international supply chains, leading to ammo imports into the U.S. dropping by 34%.

Imported ammo that does make it into the U.S. takes longer than usual, and dealers experience shipping delays between 6 to 12 months. The compromised supply chain has made it difficult to import enough ammunition to make up for domestic manufacturers’ inability to keep up with the rising ammo demand.

Copper is one of the primary materials needed to make bullets. However, due to COVID-19 and other factors, American ammo manufacturers are experiencing a copper shortage.

According to Chris Metz, Vista Outdoor CEO, the company’s ammunition production facilities have been competing with electric car companies and the U.S. Mint for copper. Vista Outdoor is the parent company of ammo brands like Remington, Federal, CCI, and Speer.

What Caused the Increase in Gun Purchases? 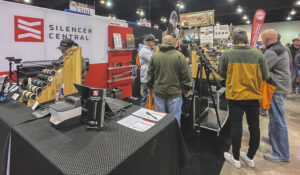 According to the New York Times, American gun buyers increased from 5.3% in 2019 to 6.5% in 2020 (17 million buyers). About one-fifth of these buyers were first-time purchasers, and the gun purchase trend continued until the end of 2021.

As we’ve mentioned, one of the leading causes of the current ammo shortage is increased gun purchases and ownership. So, why are so many Americans suddenly buying guns? Below are some of the top reasons:

After President Obama became president in 2008, many Americans thought he would tighten gun control laws and restrict gun purchases. Fearing that they would become unable to buy guns, many Americans began panic-buying and hoarding firearms.

Even though Obama never passed any significant gun control laws, firearm manufacturers still could not keep up with the spike in demand, leading to ammo shortages. According to the Washington Post, gun demand slightly dropped after President Trump was elected in 2017. The sudden drop was because President Trump and the Republican Party promised to protect Second Amendment rights.

However, during President Trump’s term, more people of color and LGBT individuals became gun owners to protect themselves against racial and gender-based violence. According to The COVID States Project, gun demand shot up again in June 2020 due to the Black Lives Matter protests.

The COVID-19 pandemic and multiple lockdowns spurred psychological stress and paranoia. Conspiracy theorists touting the end of the world fueled uncertainty and worsened the situation. In response, more Americans bought guns to feel safer as the pandemic and lockdowns became more widespread.

Also, like other factories, gun manufacturers stopped production during the height of the pandemic. Fearing long-term scarcity, many gun enthusiasts started panic-buying and hoarding firearms and ammo.

A 2021 Gallup survey showed that 88% of Americans own a gun for personal protection or safety. Proof of this is evident in the uptick in gun purchases after gun violence or mass shooting events like Sandy Hook and the Las Vegas Strip massacre.

In 2020, several anti-racism and police violence protests occurred, leading to injuries, deaths, and damaged properties. For property and personal protection, more Americans bought guns. Firearm purchases during the protests contributed to 2020 having the highest number of background checks and gun purchases on record in the U.S.

What Problems Has the Ammo Shortage Caused for Gun Owners?

The ammo shortage has been a blast for several firearm manufacturers. For instance, since 2020, Ammo Inc. and other gun manufacturers have seen their stock prices outperform estimates.

Also, sky-high demand means that manufacturers can count on their products to sell out quickly, leading to increased and faster revenue generation. Some manufacturers are even considering opening more manufacturing plants.

While the bullet shortage has been a blessing for firearm makers, gun owners have found the situation less enjoyable due to issues like:

Cost of Ammunition Has Spiked

When demand exceeds supply, manufacturers have the upper hand and can dictate prices. That’s why companies like Remington have been able to increase ammo prices multiple times between 2020 and 2021.

Consumers have to suffer the increased prices alongside not having access to as much ammo as they want. Even illegal bullets from unregistered dealers, such as hoarders and black-market sellers, the price of ammo is still higher than in previous years.

Ammo scarcity and high prices have led to hunters and other gun owners rationing their bullets. Otherwise, they could end up with zero ammo and no way to replenish their stock. For this reason, hunters are hunting less, and people are visiting the gun range less often. Some gun owners have even chosen to save their limited ammo for emergencies or necessities.

What Is the Hardest Ammo to Find?

The current ammunition shortage has made specific ammo harder to find than others. Some of the hardest to find and most expensive bullets include:

Note that your location in the U.S. will significantly influence prices and your chances of getting specific ammo. However, you can hunt for good bargains by shopping online.

Now that you know why the ammo shortage persists, you might be wondering when it will end. Unfortunately, many ammo dealers expect the shortage and price hikes to continue into early 2023, especially if more Americans keep buying guns.

However, if COVID-19 supply chain issues reduce, dealers may start importing more ammunition to support domestically produced ammo supplies. Pending when that happens, you should avoid spraying and praying. Conserve your ammo and avoid wasting shots by investing in firearm accessories that improve aim, such as suppressors and scopes.

10 of The Best Cartridges for Bringing Down Elk