How Long Do Suppressors Last

How long do suppressors last? Well, that is a darn good question and a very difficult one to answer. After all, there are still first-generation Maxim Silencers from the early 20th century running around! That means, on one hand, we can truthfully say “at least 100 years” but on the other hand, there are plenty of videos of people burning up suppressors on full-auto fire and destroying them in under ten thousand rounds.

So, the honest answer to how the question of how long suppressors last is “it depends on the suppressor and how you use it.” Let’s take a closer look at what makes a suppressor last, and how to actually wear one out.

While there are some oddball disposable proof of concept 3D printed suppressors, and all manner of improvised throwaways like the mythical 2-liter soda bottle taped to a muzzle, we aren’t interested in throwaway silencers of dubious utility and legality.

Oddball stuff aside, suppressors have a durable outer body (tube or can, if you like), internal baffles that may or may not be disposable (Nomex wipes, for instance), and end caps that let the bullet leave the suppressor and the suppressor mount to the gun.

Typically various alloys of aluminum, steel, and titanium are used for these parts. The caliber being used, type of shooting, and even price points all determine the choices of which metal to use. For instance, you can get away with an all-aluminum suppressor for a .22 rimfire, but you really can’t for a .338 Lapua. Steel is heavy but cheaper. Titanium is more durable and lighter, but also more expensive.

But right now, other than the common sense of using strong alloys for centerfire rounds, we can’t tell much about how long a suppressor will last just by what it is made of. For that, we still need to know more. 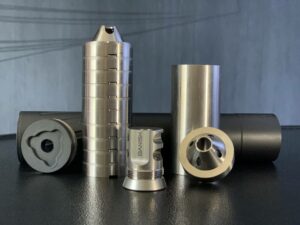 What Are You Shooting?

Suppressors work by trapping and containing high-pressure, high-temperature gas, and forcing it to cool off and travel further by passing it through a series of baffles. The shape of baffles and the internals don’t matter much for the sake of this conversation, because the goal is the same – slow down and cool gas. Slower, cooler gas makes for a quieter report out of your barrel. Obviously, supersonic bullets add to the noise too, but suppressors don’t deal with that. They handle very hot, and very fast-moving gas and make it cooler and slower. For more on the inner workings of suppressors, head to our full article on how suppressors work.

Now, any device that handles gas under pressure and temperature is going to start experiencing wear, as both of those factors stress the metal of your suppressor. Here a little common sense kicks in. A bolt action .22 or even a high powered hunting rifle will put less wear on a suppressor than a full auto military rifle, or even a modern semi automatic sporting carbine.

Heat is the ultimate enemy of a suppressor (that, and physical obstructions). The longer you run a hot suppressor and the hotter it gets, the weaker it gets as the tempering of the metal starts breaking down. Suppressors run red hot will have a very short life span.

And that brings us to our next point…

How Are You Shooting?

If you are lucky enough to have a full-auto firearm and a suppressor built for full auto use, the odd mag dump here and there isn’t going to burn up your suppressor anytime soon. You see, it does take some time for a suppressor to get hot enough to sustain real damage.

In other words, unless you are abusing your silencer or running ammo through it that it isn’t rated for, your suppressor can last a very long time. Every suppressor and every shooter is different, but we can see now that high, sustained rates of fire will destroy a suppressor much faster than slow, limited rates of fire. This video shows a top-rated SilencerCo suppressor melting down at about 400 rounds! Yet that same suppressor on a bolt action or AR-style semi-auto rifle will last many thousands upon thousands of rounds with sane, rational use.

Physical Damage to the Suppressor

While heat is the biggest destroyer of suppressor lifespan, there is one other enemy that will make your suppressor last as little as one round: poor installation.

Baffle strikes are what happens when the suppressor is not properly aligned with the bore, and the straight-shooting bullet encounters a not so straight exit hole. The usual cause of baffle strikes is a poorly-threaded muzzle, which prevents proper alignment of the suppressor.

Fortunately, you can have your guns expertly threaded, which guarantees a perfectly threaded muzzle using state of the art CNC machines! 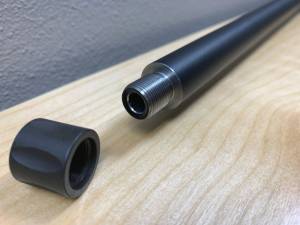 Extending the Life of Your Suppressors

We can’t give you a round count for “how long does a suppressor last” because it can be as little as one round to “we don’t know because it still hasn’t worn out after over a century.” But we can tell you if you follow these common-sense steps, your suppressor probably will become a family heirloom:

A well-built modern suppressor like the all-titanium, multi-caliber BANISH suppressor can last your lifetime and the lifetime of your children and grandchildren if cared for correctly and not abused. You can rest assured that unless you are buying absolute bottom end budget suppressors and not abusing them with high sustained rates of fire, your suppressor will be a durable, long-lasting investment.

Head to our online store to see a full line of silencers for everything from .22 to .50 BMG and 12 gauge shotgun, and feel free to call or email us to find out what suppressor is right for you and your intended use!

How Does A Silencer Work?