How Loud is a Gunshot? Gun DB Levels Compared

As the nation’s largest silencer dealer, we are often asked: “how loud is a gunshot?” The next question is often “how loud is a gunshot with a silencer?” To answer these questions, we need to look at a few things first in order to understand what’s going on. We’ll touch on how silencers work, how noise is measured, and what safe limits are for noise exposure.

Very rarely do silencers actually enable silent shooting. Most rifle and handgun bullets move faster than the speed of sound and will always create a loud “crack” as they break the sound barrier. Slower bullets are sometimes less effective and will perform at shorter ranges, while the quietest ammo is also going to be the weakest ammo. That’s why the Hollywood and anti-silencer myth of whisper-quiet murder weapons is largely just that – a myth. But let’s take a look at why.

How Loud are Guns?

As an example of how loud a gunshot can be, a .22 caliber rifle with standard velocity ammo creates 140 dB of sound. That’s loud enough to cause permanent hearing damage and physical pain. More powerful centerfire ammo is even louder.

Sound is measured in decibels (Db) on a logarithmic scale. Sounds 10 times louder than total silence would be 10 dB, and sounds 100 times louder than silence are 20 dB. See how every 10 dB increase is a multiple of 10 times over the previous rating?

If you’re wondering how loud a gunshot is with hearing protection, the answer is more difficult, as various types of earplugs and muffs reduce sound by different amounts. All hearing protection designed for shooting is intended to bring what you hear down to below 140 dB using common ammo. Suppressors are another way to reduce gunshot noise below that 140 dB threshold.

Take a quick look at our handy suppressed gun decibel chart. As a benchmark, a lawnmower is about 90 dB, and a common BB gun hits 97 dB in sound. If you look at the sound of various suppressed and unsuppressed types of guns, you’ll see a few interesting things. For instance, the relatively low-powered .22 rimfire is pretty easy to take down to hearing safe levels (and it gets quieter if you use weaker and slower subsonic ammo). But a rifle shooting the popular .308 round, even when fitted with a suppressor, is just barely safe to shoot without hearing protection. The same goes for the popular AR-15 sporting carbine. 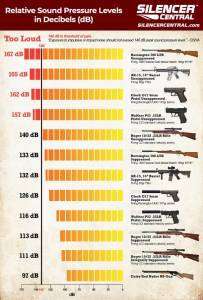 Even suppressed, guns still create sound. Centerfire rifles and pistols create recognizable and noticeable noise when fired, while rimfire is still louder than a lawnmower. Some ammo that’s designed to reduce power and speed can be quieter than this chart, but that ammo is the exception rather than the rule. The hunter trades a quieter round for power.

There are a lot of other factors that affect the sound of a suppressed or unsuppressed gunshot, including powder charge, bullet weight, and the speed of the bullet. Faster bullets with lots of powder behind them will make more noise than slower bullets.

How Loud is a Gunshot Indoors?

There is no hard and fast rule for determining the sound of a gun when fired indoors. A concrete-walled shooting range will be louder than shooting a gun inside your home in a self-defense setting due to the way different materials and construction absorb and reflect sound. However, the initial sound of a gun remains the same indoors or out. Shooting a gun inside can concentrate the sound and cause a greater impact on the shooter.

This is why silencers are increasingly popular for home defense and law enforcement use, as it protects the hearing of the shooter in dangerous situations.

How Loud Is a Gunshot Without Hearing Protection?

With only a couple uncommon and very low-powered rimfire rounds as the exception, no gun is safe to shoot without hearing protection. Almost all guns make dangerous and damaging noise that can cause permanent hearing loss with a single shot. People who have been exposed to gunfire sound may think they are “used to it” but the reality is they have lost hearing, and once you lose hearing it’s gone forever.

Why Use a Suppressor?

Suppressors are the only device proven to reduce the sound of gunfire at the muzzle where you need it the most. All other forms of hearing protection only mask the sound to the person wearing it. A silencer reduces sound for all around the gun. This is invaluable when hunting, at outdoor ranges where a reduction in noise pollution is desired, or in a personal defense situation. 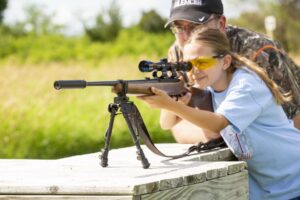 Silencers are sound pollution-reducing devices. Think of them as mufflers for cars. In fact, the term “muffler” is sometimes used for silencers, and Hiram Percy Maxim who invented the silencer in 1909 used the exact same technology to create the first effective automobile muffler. His company is still in business today creating technology for reducing noise pollution.

If you look at our gun silencer decibel chart, you see that every time you use a silencer, you reduce the actual sound to hearing safe levels. Nothing else can do this, because silencers effectively muffle the gas of firing at the muzzle, and slow it down to make the shot quieter.

The Benefits of Shooting with a Suppressor

Gun silencers are safety devices intended to reduce the real noise of shooting and protect the hearing of the shooter and people around the shooter. From their original invention in 1909, suppressors have been used as tools for politer and safer shooting. Many European nations encourage their use in certain hunting and outdoor shooting scenarios. They are used by Americans every day for sport shooting, hunting, on guns intended for home defense, and on ranch rifles.

Silencers protect hearing, make outdoor ranges less noisy to people who might live or work near them, and make hunting safer while reducing noise pollution in the wilderness shared by all Americans.

If you want to know more about silencers or how they would work with your specific gun or ammo load, please reach out to us. Silencer Central has been in business for almost two decades and is dedicated to giving our customers the support and information they need to make informed, educated choices when buying a silencer.