If you’ve never tried it before, you may ask yourself “why hunt prairie dogs?” Most people think of hunting in terms of big game, but once you’ve experienced the thrill of hunting small game like prairie dogs, you’re very likely to be hooked.

If a prairie dog hunt is something that interests you, it’s important to put yourself in the best position to succeed before you head out to the field. We’ve got you covered — check out our top five prairie dog hunting tips so that once the time comes, you can hit the ground running!

Hunt with a Suppressor

This is perhaps the most valuable prairie dog hunting tip out there, and it’s likely going to make the biggest difference between success and failure for you in the field. Prairie dogs have an incredibly sensitive sense of hearing, and they’re also startled pretty easily. Because of that, if they start to hear gunshots, they’ll scamper into their holes in the ground and won’t come out for a while, rendering you ineffective as a hunter.

If you use a suppressor, you can get a lot more shots in throughout the day without scaring the prairie dogs, which will give you more time out in the field and way better odds of success. Your goal is to keep the prairie dogs as unsuspecting as possible so that they remain out of their holes, and the best way to do this is to eliminate the noise coming from the barrel of your gun.

Obviously, before you go on a prairie dog hunt, it’s important that you know where to go. To start, you’ll want to hone in on the right states. Western prairie states such as the Dakotas, Montana, Nebraska, and Wyoming are the best states to go to hunt prairie dogs, as they provide wide open plains and plenty of flat land for you to cover that is littered with prairie dogs. 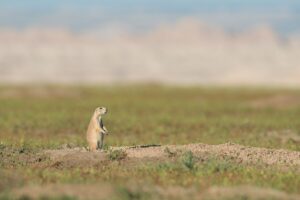 Once you’re in the right state, you’ll need to find the right location. Do some research on the Internet to see which places are currently popular for prairie dog hunting. There are Internet guides and forums that you can use that will put you in the best position to succeed, so be sure to do your research ahead of time so that you can spend more time shooting and less time searching.

Prairie dog hunting isn’t exactly the most dangerous form of hunting, but there is one element of danger that you do need to be wary of — the elements themselves. As mentioned before, prairie dog hunting often happens in wide-open plains, and you’ll often be positioned in higher elevations in order to get leverage over the prairie dogs. Because of this, you’re going to be very exposed to the wind and the sun.

Aside from a rifle, sunscreen and hats may be the best friend of a prairie dog hunter. You’ll be very exposed to the elements, so do your due diligence when it comes to the gear you bring and the outfit you wear. Skipping on sunscreen or a hat is not only uncomfortable, but it is downright negligent to the health of your skin. Take the proper precautions ahead of time so that you can prairie dog hunt for as long as possible.

Hone in on Your Target

It’s no secret that prairie dogs are pretty small targets. Their vital region is minuscule, meaning that it’s going to take an accurate shot in order to take one down — and that’s just when they’re standing still. When you take into account how often and how quickly they move around, you’re going to need to be shooting accurately in order to succeed in your hunt. 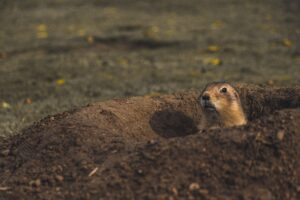 Take the time ahead of time to hone in on your aim — both on your rifle and with your own skillset. You’ll want to be as dialed in as possible before you head out to the hunt so that you are taking out more prairie dogs. Every shot counts on a prairie dog hunt (especially when the critters start to get suspicious), so come prepared with your A-game.

Have the Right Equipment (and Plenty of Ammo)

Finally, before you head out on the hunt, you’re going to want to make sure you have all of the right equipment conducive to success. Here’s a quick list of things that are sure to make your prairie dog hunt a much smoother experience:

You’ll also want to make sure that you bring plenty of ammo with you. Prairie dog hunting is unlike any other form of varmint hunting due mainly to how much shooting you’ll actually be doing. You’ll be taking plenty of shots, so you want to make sure that you have the ammunition necessary to make the best of things. You don’t want to have to call your hunt early due to a lack of ammo!

Get a Leg Up on Your Prey

When you’re taking on a task as difficult as prairie dog hunting, it’s important that you find any advantage you can in order to have a successful hunt. As mentioned earlier, one of the best ways to do so is with a suppressor from Silencer Central. A suppressor will help you maintain the element of surprise while improving your accuracy, which is a major leg up for you on your hunt. Learn more about Silencer Central today!