To many people, silencers are themselves some kind of mythical object, obtainable only by a select few people after jumping through many mysterious hoops over a long period of time.

Unfortunately, this has led to the rise of a lot of silencer myths. This list is by no means comprehensive, but it will debunk some of the most common ones you may have heard before. In fact, you may even be guilty of believing or repeating one or more of them. That’s OK; the goal here is to educate, not berate.

Here’s a list of the seven myths that will be covered. These ones were chosen because they seem to come up a lot. If there’s a specific one that sticks out most to you, feel free to jump ahead. Otherwise, let’s tackle seven common silencer myths!

I’m going to let you in on a little secret: everything in Hollywood is fake. Yes, everything – including how they portray silencers.

One of the best recent examples would be the mall shooting scene from John Wick: Chapter 2 where there’s a suppressed gunfight while the two characters are walking through crowds of people and no one even bats an eye despite dozens of shots going off. It makes for a great movie, but it’s not realistic.

Now, it’s true that suppressors absolutely do make guns quieter, bringing them down to decibel levels that are considered “hearing safe,” but that doesn’t mean they’re practically silent. For example, a jackhammer and a chainsaw both fall under the decibel threshold of being considered hearing safe for short periods of time, but they’re far from silent.

But what about a suppressed .22 caliber rifle with subsonic ammo? That’s as close to Hollywood-quiet as it gets. You can shoot that all day long with no problem – but you’re still going to hear it.

Myth #2: You Need to Have a Class 3 License to Own a Silencer

Some people get confused with this one because there is a kernel of truth to it – just not in the way people think. While it’s indeed true that there is a special license involved with silencers, that license only applies to the dealer from which you’re buying the silencer. Not all dealers are licensed to sell silencers, but you as a person can buy one from any dealer that is licensed to do so.

It’s no secret that the process for buying a suppressor is longer and more complicated than buying a firearm, but one thing that is not part of that process is your needing to have some kind of “special license” to buy and own one.

Silencers – or any device, for that matter – that you attach to the end of your gun’s barrel is going to have some kind of impact on how the gun performs. You have to expect some kind of change, but change isn’t always a bad thing. 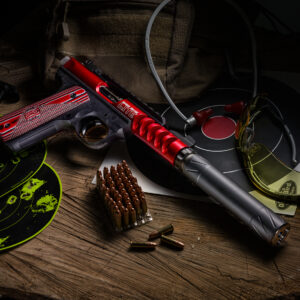 In this case, yes, silencers can have an impact on velocity – but it’s actually a positive impact. Essentially, the suppressor is lengthening the barrel of the firearm that it is attached to, which gives the fired cartridge’s expanding gasses more time to push the bullet ever faster before it leaves the muzzle. To be clear, though, it’s not going to cause a significant increase in velocity; don’t expect an astounding positive change in velocity performance. The main thing to know is that it’s definitely not going to have a negative impact on velocity, so just put that thought out of your mind.

The short answer is that silencers are not illegal under federal law. They are, however, highly regulated under the National Firearms Act of 1934. Sometimes people get confused by the extra laws governing silencer ownership, and they mistakenly think this means that they’re illegal, but that simply isn’t true for the vast majority of people living in the United States.

As of the time of the writing of this article, silencers are legal to own in 42 of the 50 states. The eight prohibited states include California, Delaware, Hawaii, Illinois, Massachusetts, New York, New Jersey, and Rhode Island. (They’re also illegal in the District of Columbia, which isn’t a state.) 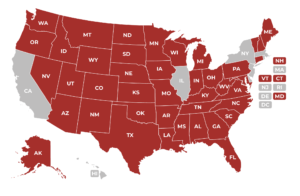 As long as you live in one of those 42 legal states and abide by all of the local, state, and federal laws governing silencer ownership, then you can absolutely own one.

Myth #5: Hunting with Silencers is Illegal

As of the time of the writing of this article, silencers are legal for hunting in 40 of the 42 states where suppressors are legal. Sorry, Connecticut and Vermont. While you absolutely can own a suppressor, state law still says that you can’t hunt with one.

Fortunately, the attitude toward the use of suppressors while hunting has been changing in a good way. Since 2011, 18 states have legalized hunting with a suppressor. Hopefully, the two New England holdouts will come along shortly. If you’re a hunter and a suppressor owner in one of those states, make sure you’re reaching out to your state government representatives to help them get with the program!

So, to recap: as long as you live in one of these 40 states and abide by all of the local, state, and federal laws governing silencer ownership and hunting with a silencer, then you can absolutely own one and take it into the field with you when you go hunting.

Myth #6: Silencers are Only Useful in Tactical Situations

Once again, we have Hollywood and the internet to blame for this myth. It seems like every movie, TV show, and social media feed out there that depicts the military, law enforcement, and professional or amateur shooters has everyone looking like they’re participating in super tactical situations where suppressors are something that only “operators” should be using.

That’s not to say that there aren’t tactical benefits to a suppressor, but a lot of what you see is just to make TV and movies more interesting, and the stuff you see on social media is a lot of people just “doin’ it for the ‘gram.”

This list could go on and on about suppressor benefits that have nothing to do with being tactical, but I think the point has been made.

Myth #7: Silencers Have a Short Lifespan

Silencers aren’t cheap, and this myth has probably kept quite a few people from buying one.

Interestingly enough, this didn’t use to be a myth. In the early days of silencers back in the first few decades of the 20th century, silencer technology was in its infancy. At that time, they used less durable materials to muffle the sound of the gunshots. That material was disposable and was actually designed to be replaced after a certain number of shots.

Today, a silencer muffles the sound of gunshots by using high-strength baffles that are designed to last for tens – if not hundreds – of thousands of rounds. As long as you don’t abuse your silencer and you clean it appropriately, it’s entirely reasonable to expect your silencer to have a longer lifespan than you. A bit morbid, sure, but it’s true.

Hopefully, this has helped dispel any of the silencer myths you may have heard or even repeated yourself. Of course, there are plenty more out there that weren’t covered.

If that’s the case, we can help. Silencer Central has been selling silencers all day, every day for more than 15 years in every state where silencers are legal. Needless to say, our staff has heard just about every silencer myth there is.

Get in touch with us and we’d be happy to answer any and all suppressor-related questions you may have. Once that’s squared away, we’d be happy to help you start your own journey toward suppressor ownership. Then, you can help dispel silencer myths as well!

Get to Know the Types of Suppressors