The Best Calibers for Bear Hunting

Going on a bear hunt is an exciting endeavor, but it’s one that will undoubtedly leave you with lots of questions. One of the main questions you may have may revolve around what the best caliber for bears would be.

If you want to go on a successful bear hunt, you’ll obviously need to choose the right bear ammo. Read on to learn more about what can kill a bear, a bear’s kill zone and our choices for the best bear ammo.

What Ammo Can Kill a Bear?

When it comes to bear hunting, the most important thing to consider is whether or not your gun can place plenty of accurate and powerful shots within a short timeframe. You’ll have much more success with a couple of well-placed shots in rapid succession than you will with a “spray and pray” technique.

Because of this, you’ll want to find ammo that is reliable and a firearm that can fire multiple rounds in a quick manner. Obviously, bear hunting can be a dangerous game, which is why you’ll need to be 100% confident in your weaponry before you take to the field.

A bear that is hit with ammo well will not last long and it’s actually an easy animal to kill if you know where to aim. However, if you don’t hit it in the right spot, you can obviously irritate the bear, which can lead to some dangerous consequences. This is why a well-timed and well-placed shot is so important in bear hunting — oftentimes, you’ll only have one shot at it, so you’ll want to make it count.

Bears are dense creatures that are made up of thick fur and skin, muscle, and plenty of fat. Because of their anatomy, it’s actually more beneficial to go for a double lung shot than it is to go for the heart. Bears are seemingly constantly moving in some way, shape, or form, and because of this, it can be hard to get an accurate shot off. Be patient and wait for either a broadside shot or a slightly quartering shot with the onside front shoulder forward or straight down. If you can get a solid shot in like this, you stand a better chance of finding success.

Penetration is extremely important. As mentioned earlier, all of the thick fur, skin, muscle, and fat make it hard for a bullet or arrow to make it through the bear, which is why you want to wait for a shot that will have both an entry and an exit point. This will put two holes in the bear and will lead to more blood escaping the body, which in turn weakens the bear and gives a hunter a better chance of success.

The Best Ammo for Stopping Bears in Their Tracks

Now that you know more about the logistics and the proper technique for successfully bringing down a bear, here are our picks for the best bear ammo available. 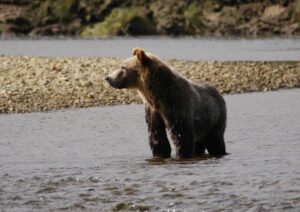 This cartridge has been one of the most popular big game cartridges for decades now, and it’s easy to see why — it’s versatile, it’s powerful and it comes out of the barrel with intense speed. Many hunters in Alaska rely on it due to its ability to send a massive projectile at 2,000 fps and 3,600 ft.-lbs from the muzzle. If you have a lever-action rifle and need something that’s reliable and powerful, then this may be the best caliber for you.

The .375 H&H Magnum is a popular gun amongst big game hunters in Africa, so you can rest assured that it will translate to your bear hunt. It has the ability to launch a 270-grain bullet at 4,300 ft.-lbs and 2,7000 fps, which will put a massive hole into any target it comes across. You may also benefit from using a rifle that can quickly send a follow-up shot in case the first bullet doesn’t do the trick, which may be the case if you don’t get an accurate shot off.

Not only is the .30/30 Winchester a proven black bear killer, but it’s possibly the most-proven black bear killer on the market. It’s a quick expanding cartridge that can hit a bear with a 155-grain bullet coming in at 2,390 fps and 1,966 ft/lbs. It’s the perfect match for a lightweight rifle that’s easy to carry while also packing plenty of power.

If you’re wanting to utilize something that is guaranteed to stop a charging bear with a couple of well-placed shots, then you’ll want plenty of firepower. This ammo can hit any bear with 300 pounds of lead and copper that is sure to stop any bear in its tracks. It packs a bullet weight of 385 grains, a muzzle velocity of 1,850 fps, and muzzle energy of 2,925 ft/lbs.

If you’re hoping to take down a bear with a pistol, then the minimum that you’ll need is a .44 Magnum. This pistol packs a powerful punch while still being small enough to fit in the hands, which makes it a popular choice for people who want a sidearm when they take to the field for a bear hunt.

Give Yourself the Advantage of Bear Hunting Suppressed

When you’re hunting a bear, you’re hunting one of the most dangerous predators in the wild, which is why it’s important to take every single advantage that you can. One of the ways that you can do this is by hunting with a suppressor from Silencer Central A suppressor can provide you with a quiet and accurate shot that will benefit you as a hunter every time that you take the field. Shop our selection of silencers today

What is the Best Mule Deer Caliber?

A Complete Guide to Rabbit Hunting for Beginners