The Best Deer Hunting States in 2022

What do deer hunting and real estate have in common? Location matters. When planning a deer hunt, determining a location is the first and most important decision that you’ll make, and the location you decide upon can make a drastic difference to how your hunt goes.

There are plenty of different factors that go into picking the best states for hunters, and it all starts by looking at the deer population statistics. Read on to take a look at the data for yourself and use it to help you decide where to go for your next hunt!

It is estimated that the total US deer population is somewhere around 33.5 million deer. However, that is not an evenly spread figure across all fifty states. There are several variables that can cause a boom or bust in the deer population of a state, including the state’s terrain, environment, and how many active hunters live there.

But what do the numbers tell us? Here’s a rundown of the top ten states for deer hunting based on the best whitetail B&C (Boone & Crockett, the typical deer ranking system) rankings in the past decade:

Far and away, Wisconsin is the highest producer of B&C-ranked whitetails. The deer reach massive sizes, and with an abundance of federal and state-owned land, any hunter who is willing to research, walk and put in the work has a chance to score a great deer.

Despite the fact that Kentucky is a one-buck-per-year state, that hasn’t stopped hunters there from having success. Since 2010 alone, Kentucky hunters have killed over 345 bucks that have made the minimum for the B&C record book, and the state is also home to five of the top counties in the country for B&C entries.

With over 370 bucks logged to reach B&C’s record book minimum since 2010, Ohio has proven itself over the past decade to be a great hunting ground for hunters looking for a big score. Bowhunters have an advantage in this state since their season starts well before the rut and lasts for months.

With over 55,000 acres of public land available to Indianans, there are plenty of opportunities for hunters all across the state. It’s home to three counties that consistently rank high on the B&C buck list (Fayette, Delaware, and Jasper Park) and the peak of the rut always proves fruitful for hunters across the state.

It’s pretty well known that Iowa produces some monster bucks, and with over 300,000 acres of public land available to hunters, you have plenty of chances to hunt one down. The only reason that Iowa isn’t higher up on this list is because of the demand for buck tags — you have to enter a lottery for one of the state’s buck tags, and it takes three or four years for nonresident hunters to accrue preference points in order to secure a tag.

Although most of the public land in the state is located in the remote northern region, the majority of big B&C-ranked bucks are being killed in the southeast corner of the state. However, regardless of where you go within the state, you’ll have plenty of opportunities to track down a great deer.

Much has been made of the Illinois “Golden Triangle” of counties (Pike, Brown, and Adams) and the legendary deer that have been harvested there. Despite the attention the region gets on a national level, these counties continue to provide great deer — even later on in the year during rifle or muzzleloader seasons.

In the past decade, over 239 whitetails have been killed in Kansas that made the B&C book. Like Iowa, there is a large demand for tags, and it can take a few years of adding up preference points for you to get the tag that you want. But, once you finally get the tag, you’ll have plenty of places to hunt via public land and acres open to hunters through landowner-access programs.

There are plenty of bucks to go around in Missouri. Thanks to the state’s lower hunter population, it’s a two-buck state (one of the two must be taken with archery gear), and although there are some antler restrictions in a few counties, that shouldn’t stop you from getting some solid deer. Nonresident hunters can also hunt here without going through a lottery or draw process for a tag.

They say everything is bigger in Texas, and the deer are no exception. Most of the trophy whitetail hunting happens on Texas ranches, which can be exclusive and pricey. But with that being said, there are still plenty of opportunities to track down a great deer on public land — you just have to do your research and hunt a little harder.

Are you just looking to go to the place where the most deer are available to hunt? According to a 2015 deer population estimate by North American Whitetail magazine, here are the states with the largest deer populations:

States with the Lowest Hunting Pressure

Unfortunately, when you are hunting deer, the deer isn’t the only thing you have to worry about. You’re also indirectly competing with other hunters across the state. The number of deer hunters by state is oftentimes referred to as the state’s hunting pressure, and hunting in a state with too much pressure can leave you with an unfilled tag at the end of the year.

Here’s a list of the ten states with the least amount of hunting pressure:

States with the Highest Deer Density

The deer density of a state refers to the average amount of deer found per square mile. Obviously, there are a few factors to this metric, such as the size of the state, the amount of urban vs. rural land, etc.

Courtesy of onX Hunt, here are the eight states in the USA with the highest deer density:

Let’s get down to brass tacks here — which states are harvesting the most deer on a consistent basis? These numbers obviously draw on all of the metrics previously mentioned, but they still paint a good picture of which hunters are having the most success around the country throughout the past decade. 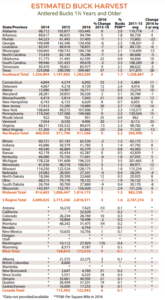 You can read the entire Whitetail Report here to learn more about these specific numbers as well as some other deer harvest by state metrics recorded in the past few years.

Take Full Advantage of Your Tag This Season

Do all of these numbers and statistics have you pumped up and ready for deer hunting season to begin? Understanding the numbers is only half of the battle — the other half is preparation. That’s where Silencer Central can help you out. We offer a wide variety of silencers, accessories, and services that can have you and your gun ready for the fall. Contact us today to learn more about how we can help you harvest the deer of your dreams this autumn!

A Better Approach to Hearing Protection for Hunting