The only way to achieve an accurate shot, whether while target shooting or in a hunting scenario, is to hold your rifle steady. Making sure that your gun doesn’t move off of the target will not only give you tighter groups and/or better scores on your targets, but it is essential to ensure a humane harvest while hunting.

So, how do you hold your rifle steady? Just don’t move, right? Well, yes, but it isn’t actually that simple. We’ll look at some tips and tricks for actually holding your rifle steady as well as some ways you can work on yourself personally to get a steadier hold.

How to Hold a Rifle Steady

Not moving is key to holding a rifle steady, but have you actually tried standing straight up in the field or on the range and holding your gun perfectly still? It’s not as easy as you might think, especially if you’re in less-than-ideal circumstances or situations. To help combat this, there are some key things you can do to help keep steady.

Try to Shoot from the Prone Position

Think of your body like a tree. They tend to sway with even the slightest breeze when they’re standing in the forest, but it takes a great deal of effort to move a tree that is lying on the forest floor.

When standing up, you’ve got more room for movement in your body. When lying prone on the ground, you eliminate almost all of the movement variables from the equation. If you shoot from the prone position while incorporating the items below, you’ll definitely be able to hold your rifle much more steady in any shooting situation.

Use a Rear Support

Get a Tripod or Bipod for Balance 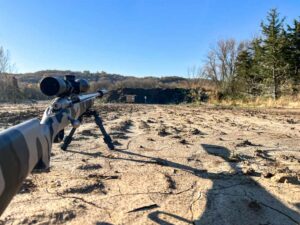 Bipods have long been a mainstay on rifles in a variety of applications, and for good reason – they work. A bipod is a solid option for creating a steady rifle.

If two is better than one, then three is obviously better than two. Tripods have become increasingly popular in both long-range shooting and hunting scenarios. They allow you to have maximum stability and control of your rifle to create a rock-solid hold. This is especially important if you’re going to be shooting at long distances.

Add a Sling to Your Gun

Slings are great for lugging your rifle around, but they’re also a really important component for steadying your rifle when it comes time to shoot.

If you’ve ever looked at some precision rifle competitors, you’ll notice that they’re using slings while shooting. They’ve got their arms and hands wrapped up in specific ways in the sling to create multiple points of contact and support that are tight and secure. Again, they do this for good reason – it works.

Of course, none of the above matters at all if you’re not physically capable of holding the rifle properly in the first place. Working on your own strength will help you keep the rifle steady when it really counts. Plus, you get the added bonus of working out and improving your overall health while you’re at it. (We promise not to tell your significant other that you’re only going to the gym to prep for an upcoming back-country elk hunt that they may or may not be aware of yet.)

With your arms extended out to the sides, rotate them clockwise and then counterclockwise for as many reps as you can. If it’s only 25 to start, that’s fine; everyone has to start somewhere. Increase the reps as you go until you can get up to 100 in each direction. Once you master the rotations, start adding weights in your hands while you do it.

Your arms don’t end at your wrists, so don’t ignore them when it comes to getting fit. You use your wrists a lot when it comes to shooting a rifle, both in your shooting arm and your support arm, so it’s important to keep them strong and flexible for when you need it. Wrist flexes and curls, both with and without weights, will help you build your overall arm strength.

You won’t always be able to shoot from a prone position, so having good balance is key to holding your rifle steady in both standing and kneeling shooting positions. Practicing lunges will help when you’re in a kneeling position. As you get better at them, add some weight to your reps to increase the training difficulty.

Try hanging some weight off the end of your barrel while at home – after you’ve made sure the gun is clear, obviously. The weight could be anything – shoes tied together, a tote bag with stuff in it, etc. It doesn’t matter what it is, just that there’s some weight on the end that is trying to pull you off target.

With the weight in place on the barrel, hold as still as possible while focusing on a fixed target of your choice in one-minute intervals.

A Steady Shot is an Accurate Shot

All of the things listed above will help you hold your rifle steady for a better, more accurate shot. If you do a combination of them, you’ll definitely see your accuracy improve.

Though there is one thing we didn’t mention when it comes to getting an accurate shot, and that is using a suppressor. Thankfully, most suppressors are fairly light in weight, so they won’t throw off your overall rifle balance. They will, however, result in recoil reduction as an added bonus to their main purpose of sound reduction. Less recoil means less movement, and less movement means better accuracy.

When you’re ready to take the next step and buy your first suppressor, give us a call. Silencer Central is the nation’s largest silencer dealer, and we’ve been selling silencers all day, every day for 15 years. With our buying process, we’ll even ship your new silencer right to your door once your Form 4 has been approved.

How Does a Suppressor Reduce Gun Recoil?

Single Point vs Double Point Slings: Which is Better?