Why Hunting is Critical for Population Control

On the surface, the terms “hunting” and “wildlife conservation” may seem like polar opposites. How can one claim that they are attempting to preserve wildlife when they are heading into an environment with a weapon and an intent to kill an animal? While this juxtaposition may seem like an oxymoron, the two are more closely connected than most realize.

There are plenty of benefits to hunting, but perhaps the main benefit is its impact on wildlife populations and the environment that this wildlife inhabits. If you’re interested in the role hunting plays in ecology, read on to learn more about why hunting is so important for population control.

It wasn’t that long ago when wildlife populations were in jeopardy. Back in the 1800s, there were very few laws that protected wildlife. Hunters and fishermen would hunt and fish to their heart’s desire, which led to steep and noticeable population declines amongst game and fish. In fact, many species such as turkeys, whitetail deer, and bison neared extinction.

Because of this, the North American Model for Wildlife Conservation (NAMWC) was formed. This model developed a legal framework that includes seven features that are still intact to this day. These features include:

Since the structure of the NAMWC was implemented, animal populations have skyrocketed, proving that conservation and regulations can restore endangered species. In fact, we’ve hit a point in the rebound where many of these species teeter on the edge of overpopulation.

As human populations rise and natural habitats continue to be affected, it’s clear that an objective and ethical solution is needed to selectively manage wildlife populations. Throughout the history of humanity, hunting has proven to be an integral part of wildlife population control.

Although species like deer, turkeys, and elk do have natural predators, these predators can no longer do enough to control the natural population of these species. The rate at which these species reproduce has kept their populations growing, which is why human intervention is necessary to keep the species numbers at a reasonable level. 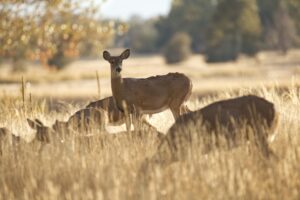 If left unchecked, these species would continue to reproduce and multiply, which would throw off entire ecosystems. There would be a scarcity of resources, which would lead these species to further encroach into urban areas, which would cause plenty of problems. There’s a finite amount of land that’s available to all of the creatures on Earth, and as we continue to go into the future, it’s important that these wildlife population counts remain controlled so that every species can prosper.

Hunting not only directly helps wildlife by controlling population numbers, but it also indirectly helps through the funding of different conservation efforts. When you purchase something such as a hunting license or a tag, you’re giving money to your state’s game and fish departments. These departments use these funds to hire employees, purchase equipment and work towards the conservation of wildlife in your state.

Without the funding that hunting and fishing provides these departments, it’s highly unlikely that they would be able to do all of the work that they currently do. It was calculated that about $5.6 billion is annually given to conservation efforts through these budgets, and it’s hard to imagine that number could be replicated without hunting and fishing. Because of this, it’s crucial that hunters continue to hunt through the current system, as it is one of the most effective ways in which we conserve wildlife and keep the natural world in balance.

Other Benefits of Hunting

In addition to the two benefits of hunting that we touched on above, there are some other benefits that hunting provides to the community, the ecosystem, and of course, to hunters themselves. 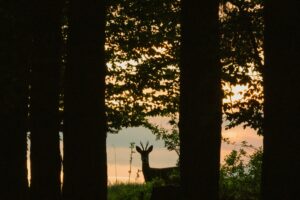 As mentioned earlier, hunting is our most powerful asset in terms of population control. Without hunting population control, the number of certain species would skyrocket, which could cause crowded environments, diminishing resources, ecological imbalance and a whole host of other negative consequences.

However, hunting is a natural way to keep these resources safe and balanced. If the animal populations are kept in check, the resources will have time to replenish, which leads to a more sustainable environment and a better ecosystem overall.

Hunting not only benefits the environment but also our communities. Hunting directly or indirectly employs untold numbers of people and drives economic growth. Whether it’s the butcher who will harvest the animal’s meat, a taxidermist who will put together a mount of a trophy animal, or a firearm accessory company like Silencer Central, there are a lot of people out there who make their living off of the tradition of hunting.

The more people hunt, the more demand there is for services like these, which provides a boost to the economy in general. Hunting and trapping is a growing industry, and if these numbers continue to increase, it should bode well for the economy overall — not just hunters.

Once it’s been killed, an animal provides meat to the hunter and his or her family, which they can keep in their freezer for an extended period of time. This makes them less reliant on going to the grocery store to get their meat — why would you shop for meat when you have plenty of delicious, wild-harvested meat waiting for you at home?

Factory farming has proven to have a negative impact on the environment and even human health, so it’s important for our future that we find alternative ways to put meat on the table. Hunting is perhaps the most efficient way to do that. Your food will come straight from the field and will cut out the need for any middle man.

A Better Connection to the Outdoors

How often does the average human get to spend time outdoors these days? Due to the rise in popularity of desk jobs, the comforts of the indoors, and all sorts of other factors, these days most people spend the majority of their time inside.

Hunting is one of the best ways to break this cycle and reconnect yourself to the outdoors. Time spent in the outdoors makes us happier and healthier, and going out on a hunt is a great way to spend long bursts of time in the outdoors with friends and family.

Enhance Your Next Hunt

As a hunter, you play a vital role within your ecosystem. Your success can make a difference in how an environment or habitat will develop for years to come. Because of this, it’s important that you head out into the field with the best equipment possible so that you can increase your odds of success.

10 of The Best Cartridges for Bringing Down Elk

15 Deer Hunting Tips that Will Make You a Better Hunter