Everything You Need to Fly with a Gun in 2022

The Second Amendment gives you the right to own and bear arms in the U.S. However, that right has limits. For instance, you cannot take a loaded firearm to public places, such as airports.

Does that mean you cannot fly with a gun? Flying with a gun is possible if you follow the rules. To learn these rules and how to fly with a gun without breaking the law, keep reading.

Is Flying with a Gun Legal?

Flying with a firearm is legal within the U.S. as long as you are over 18 and the weapon is not on you. According to the Transportation Security Administration (TSA), you must declare and check your weapons and ammunition with a TSA agent at check-in.

Your checked-in weapon will go into the plane’s cargo bay, and you can collect it with the rest of your checked-in luggage at your destination. Is there anyone who can carry a gun on a plane?

How to Pack Your Gun for the Plane 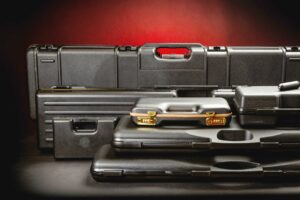 You can’t just toss a gun into your bag and head to the airport. Avoid getting arrested or into any other type of trouble by following these recommendations when you need to fly with a gun:

Get a TSA-Approved Gun Case

The TSA requires that you come to the airport with your firearm unloaded and stored in a hard-sided case. The hard-sided container must be secure enough to ensure that only you can access the weapon locked inside.

You must declare and check-in the secured and unloaded weapon with a TSA agent. If you don’t have a fully assembled gun but have firearm parts, you must secure, declare, and check them in with the TSA in the same manner. The only firearm accessories you can fly with without checking in are rifle scopes.

Padlock Your Case if It Doesn’t Have One Built-In

Pack Ammo in a TSA-Approved Case

If you are traveling with ammunition, you must declare and check-in before boarding a flight. The TSA recommends securely storing your ammo in the same hard-sided case as your gun or a separate hard-sided container.

The bullets can be inside or outside magazines or clips, but not inside a gun. Also, you must store the ammo in a fiber, plastic, wood, or metal box before placing it in your locked hard-sided case. The fiber box could be the ammo’s original cardboard packaging.

The Federal Aviation Administration permits flying with up to 11 pounds of ammunition. However, since most airlines have their own rules regarding flying with ammo, you should check your airline’s guidelines online before heading to the airport.

Look Up the Gun Laws for Your Destination

Laws governing bringing weapons to the airport typically vary between local, state, and international governments. For example, where you are coming from may permit flying with guns, but your destination may have more stringent gun laws.

Check Your Airline’s Rules Before Your Flight

Every airline has its own how-to fly with a gun manual. While these manuals generally state the same rules, some contain airline-specific guidelines. For example, American Airlines does not permit carrying loaded magazines or clips or leaving ammo rolling around in your hard case. Also, while Alaska Air allows carrying multiple firearms in a single case, Delta Airlines permits carrying only one firearm in a case.

Below are links to each airline’s rules regarding flying with a firearm and ammo:

If possible, print your airline’s rules regarding packing guns and ammo and take it with you to the airport. The printout may come in handy if you’ve followed an airline’s guidelines and a TSA agent disagrees.

CBP Form 4457 is for registering guns and ammo before traveling abroad. Filling the form will speed up passing through customs when returning to the U.S. with the guns listed in the form. That’s because the form will serve as proof that you own the guns and bought them in the U.S.

You can get a copy of the form from the Customs & Border Patrol office at the airport. However, the country you are traveling to may have its own set of gun laws and forms to fill when traveling with a gun.

Some countries also require paying fees and submitting required forms weeks or months before your arrival. Avoid complications at your destination by learning about the other country’s processes for travelers with guns and preparing the necessary forms and fees.

Going To and From the Airport with a Gun

Our how-to fly with a gun guide won’t be complete without explaining what to do at the airport before attempting to board a flight with a gun.

Getting to the Airport

After packing your guns and other luggage needed for your trip, follow these steps:

Arriving at the airport at least 30 minutes before your flight will give you enough time to declare your firearm and sign the necessary forms. It will also reduce the chances of missing your flight if complications arise while checking in your weapon.

Declare a Firearm at the Ticketing Counter

After locking your case with the gun and signed form inside, the ticketing agent may place your bag on the belt for storage or send you to the TSA screening area. At the screening area, a TSA agent will X-ray your gun case and may ask you to open it. If your gun case passes inspection, you can check it in and board your flight.

We’ve given you answers to can you carry a gun on a plane, but what about leaving the airport with your gun? At your destination, get your gun back and continue with your trip by following these steps:

Go to the Baggage Office or “Oversized Bags”

After landing at the airport, go to the baggage claim area to retrieve your firearm. If your case does not come out on the carousel, you will have to visit the baggage office or oversized baggage section to get your gun case.

Show your baggage claim ticket and ID at the baggage office or oversized baggage section. The baggage claim officials will use your ID and ticket to identify your checked-in gun case and verify your ownership.

Before handing you your gun case, an official may zip-tie it shut. Most airlines take this precaution to ensure that you cannot open the case within the airport premises. Other airlines go the extra mile of escorting gun owners off the premises before handing over their firearms.

Unless you are a law enforcement officer, deliberately or accidentally boarding a flight with a loaded or unloaded gun is illegal. It’s also against the law to board a flight with ammunition and certain firearm accessories without declaring the items. If you get caught, the consequences may include:

If the TSA catches you with an undeclared weapon at an airport, the agency could confiscate your weapon or firearm accessory, detain, and fine you. The fine could be as high as $10,000 if you had a loaded gun or ammo and an unloaded weapon. Carrying an unloaded firearm or unpermitted accessories with no ammo could attract $2,000 to $4,000 in fines.

The TSA may also issue a criminal referral and hand you over to local law enforcement. Depending on the local laws, the charge brought against you could be carrying a concealed weapon or loaded firearm in public. If you drew the firearm within the airport, the police could also charge you with brandishing a weapon or other relevant charges.

What if you get your gun past airport security and onto a plane? You could face a criminal charge for violation of U.S. Code §46505. Should the court find you guilty, you could spend up to 20 years in jail and pay up to $250,000 in fines. In the worst-case scenario, you could face terrorism or hijacking charges.

Flying with a Gun is Easier than You Think

Now that you know how to fly with a gun, you can take your favorite firearm with you for protection or sport the next time you travel. Just don’t forget to unload your gun before heading to the airport. You can also pack your ammo, silencer, and other accessories and check them in alongside your gun at the ticketing counter.

Find a Suppressor for you!
Featured products