Firearm Photography: How to Snap Awesome Pictures of Your Guns

Chances are good that you’ve got a number of gun photos stored on your phone. In fact, you might have more gun pics than you do of your kids. If you do, you’ll find no judgment here!

Now, out of all those gun photos you’ve taken, how many of them would you consider to be good? Like, this photo could definitely be in a magazine or on a calendar? That number is probably a fraction of the total number you’ve got, right?

If so, you’re not alone. It is, however, kind of odd, given all of the advances in digital photography both in terms of standalone digital cameras and the ones built into our cell phones. The fact of the matter is that taking photos has never been easier, and that’s both a blessing and a curse. All the settings get sorted out on their own, making it so that you and I have never really learned how to take a good photo. Instead of knowing what goes into taking a good photo, we just know how to push a button. So let’s change that.

You don’t have to have a nice digital camera, as we’ve already established that our phones take great pictures, so don’t worry if you don’t have some crazy expensive Sony, Nikon, or Canon camera. As for phone cameras: it makes no difference whether you’ve got an Apple or an Android phone. Both platforms have multiple options available that all have great cameras and we’re not here to debate whose operating system is better or what company offers the better cell service and customer support. That’s all irrelevant to our purposes, so take those arguments elsewhere.

Now that we’ve established that you have the basic necessary equipment, let’s take a look at what we’ll cover here so that you have all the tools and knowledge needed to start taking stellar gun photos!

The Basics of Gun Photography

Photography is, at its core, a simple process that can become overly complicated in a hurry. While there’s certainly more to it than this, let’s go over the three basics of gun photography.

You might be thinking this is silly. A subject? The gun, duh! Well, yes, but there’s more to it. Are you photographing a handgun or a rifle? That will determine how big your setup will be. Is the gun blued or Cerakoted in a dark color, or is it a nickel-plated revolver? That will determine your lighting options. Figure out what gun you’re going to photograph first, then move on to number two.

Need a Silencer to Photograph?

#2: Decide on your story

What are you trying to say with the photo? I mean, you didn’t just randomly decide that you were going to pull out a gun from your collection and start snapping photos for the hell of it, right? There’s a reason you chose to photograph this specific gun, so what is it?

Maybe you’re showing off your new AR with all the bells and whistles: lights, lasers, optics, sling, suppressors, etc? Or maybe you’re taking detailed shots of an engraved pistol slide. Both can be cool photos, but they’re going to need to tell wildly different stories if you want them to be cool photos. Now it’s time to move on to number three.

You’ve got the gun and you’ve figured out the story you want to tell. Now how are you going to do that? The answer is all in the way you set up the shot before you ever take a single picture. For the AR photo, this might entail a wider angle for the shot, extra mags scattered about, maybe a plate carrier, etc. You get the idea.

For an engraved detail photo, you’ll probably only want that small portion of the gun in the photo. For this, there’s not much to set up in the shot except for the gun and the background.

There are a lot of “nice to have’s” when it comes to photo gear. There are very few “must have’s” to get started taking great photos. You can accomplish a lot with surprisingly little.

The must-have items include a tripod (expandable or tabletop), prop rods or stands to hold the gun(s), and a plain white background.

Taking it a step further, you could add a lightbox, portable studio lights, multiple colored backgrounds, and multiple types of camera lenses.

It all comes down to budget and space. You can spend a ton of money on gear and if you’re not careful, it can take over your home.

Lighting is the absolute most important part of photography, no matter what you’re trying to photograph. Even if you’ve got limited photo skills, having good lighting can hide a multitude of sins.

How to Photograph Your Guns without a Lightbox

Unless you plan on doing a lot of gun photography, then you might not want to invest in external lights or a lightbox. That’s perfectly understandable. More often than not, you can get the same results using natural light. 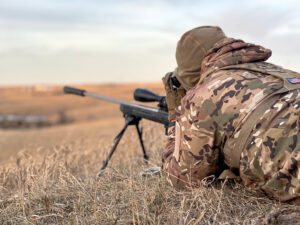 While you might think that a bright, sunny day would be best for this, you’d be wrong. There is such a thing as too much light. Instead, keep an eye on the forecast for a bright yet overcast day. The clouds act as a sort of light filter to keep the harsh shadows at bay.

Using different angles is one of a photographer’s best-kept secrets. Ever notice how real estate photos make rooms in houses look bigger and more spacious than they actually are? It’s all about the angles.

The same can be done with your guns. You can use different angles to get neat muzzle perspective or sight picture shots, focus on cool features or designs on the gun, and more. The best way to figure out what looks best here is to play around with all sorts of different angles and see what you like best.

Before determining distance, you have to figure out what you’re trying to show in the completed photo. Are you looking to show off the entire gun, just a small part of it, or maybe feature the gun with some pertinent accessories? The answer to this question will determine what distance you’re going to use while shooting.

To close or widen the gap in distance, you don’t need a super fancy zoom lens or a wide-angle lens. Instead, you can accomplish this by climbing up a ladder to get further away or by physically moving closer to get a tighter shot.

If you don’t have a nice zoom lens, definitely try to move closer instead of relying on your phone or other camera’s digital zoom. You will lose detail that way and your end shot won’t be as nice.

Intricate detail shots will require you to be up close and personal, possibly even using the macro settings on your camera or phone.

More artistic shots could require you to be a couple of feet away, but make sure that you’re not too far away. If you are, it could ruin the overall composition of the photo. This leads us to the next topic.

Framing can make or break a photo. You’ve no doubt seen a picture posted online where the gun is lying on a kitchen table stacked high with bills, silverware, keys, and more. Or worse yet, you may even see someone’s awful fungus feet or a less-than-dressed reflection in a mirror.

Be intentional with your framing so that you don’t become that guy. Keep in mind the rule of thirds. This process will direct your eyes to the parts of the image you want to show off.  Following these rules will also create a more natural-looking image, opposed to one where the subject is slapped dead center of the screen. 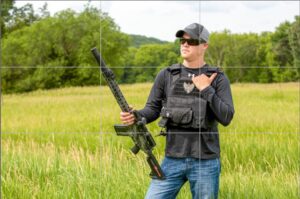 Your photos are telling a story. The only things that should be in the frame are ones that are adding to the story. If it’s a WWII M1911A1 and you’re going for a “Sands of Iwo Jima” vibe, then part of the story might be extra mags, a helmet, or web gear. Your daughter’s sandcastle mold in the sandbox you’re using is not a part of the story, so make sure you remove it completely. Don’t just assume it’s far enough away to be out of the shot.

Take Some Photos of Your Own

Practice makes perfect. You already know this since you’re into guns. You spend time on the range running live-fire drills because you know the practice makes you better. You also spend time dry firing in the living room because ammo is expensive and that kind of training is equally valuable.

The same applies to photography. The best way to get good photos is to take a lot of them. Try out different angles, different types of lighting, different backgrounds, different distances, and different story-related props.

Sometimes what looks good in your mind just won’t come together in front of the lens. Conversely, you might think something would look bad, but after you try it, you decide it actually looks good.

Thankfully, digital technology has made trial-and-error photography essentially free. You’re no longer limited by the number of shots on a roll of film, only to spend money getting them developed and find out that they didn’t end up the way you wanted.

So take lots of photos. Lots and lots of photos. Fill up that camera roll and find out what works best. Then, narrow it down to your best shots, post them online, and let the likes roll in!

Better yet, include a Banish suppressor or some Silencer Central swag in the photo to help tell the story, and be sure to tag us (#silencedelivered on Instagram) in the shots when you post them!

Find Your Next Suppressor!
Featured products