The right shooting stance helps improve accuracy, comfort, and efficiency across a number of different scenarios. If you’re searching for more information about the best positions from which to shoot, we’ve gathered the four major stances that will help you land a bullseye.

Why a Proper Shooting Stance is Key

Sometimes, shooters simply don’t pay enough attention to their stance. But, there’s a reason police departments and military organizations put so much focus on stance during their training programs. It’s because your shooting stance is key to managing recoil, staying balanced, and promoting confidence, which allows you to shoot with more accuracy.

What Makes a Good Stance?

The basics of a solid stance starts with your foot position. Place your feet at slightly wider than shoulder-width apart. This provides an aggressive, tactical platform from which to shoot, while also allowing you proper leg and gun movement between targets. You’ll want to bend your knees slightly, with about three-quarters of your weight forward on the balls of your feet. Depending on the stance, you’ll either keep your arms extended or slightly bent, in order to manage recoil. Remember to keep a firm grip on the gun.

The type of stance you choose will depend heavily upon the style of shooting you’re doing, like a shooting competition vs. hunting, for example, as well as the type of gun you use. While some stances can be used across multiple types of guns, from pistols to rifles, others cannot. Regardless, many of the same basic principles—weight forward, knees bent, feet planted firmly—apply across both types of firearms.

The Weaver stance is popular in many police departments across the country, thanks to its solid shooting platform that also allows for rapid transition from target to target. Invented by Los Angeles Sheriff Jack Weaver in the 1950s, the stance has since become somewhat of a standard, if old-school, option for all types of shooters.

The great thing about this stance is that it uses opposing forces to steady recoil and increase accuracy. Plus, it’s great for both pistol and rifle carriers and is one of the most natural stances you can assume.

To get into the Weaver stance position, place your weak foot ahead of your dominant foot, and keep your front knee slightly bent. Extend your arms out in front of you, with both dominant and the support hands cupped on the grip, and make sure to keep a bend in both elbows.

Essentially, the support hand pulls the firearm toward the torso, the shooting arm pushes it and the back leg reinforces stability. This delivers a quicker recoil decay and allows you to transition between an array of targets.

Since you are angled from the perpetrator, you create a smaller profile for them to strike.
Weaver provides great balance, thanks to its classic, boxing-style positioning.
If you happen to get pushed or physically struck, it’s easy to absorb, respond, and start sprinting if needed.

It’s easier to pivot one way vs. the other, depending on your dominant limbs.
Maintaining a proper shooting position while moving can be difficult.
Not ideal for gun owners with cross-dominant vision.

The best time to use the Weaver stance is when you need to respond to a threat quickly and accurately. It’s one of the fastest two-hand stances to provide a high-level of consistency past 25 yards.

If you’re using a powerful gun, the Weaver may not be for you. Since your elbows are bent in this stance, most of the recoil is absorbed by the wrists. That means you need a strong upper body in order to effectively manage a larger caliber pistol or powerful hunting rifle.

The isosceles stance is fairly straight-forward, being that its name comes from the shape made by your arms and chest as you assume the position. As we all remember from high school geometry, isosceles triangles are equal on two sides, and this is what your stance should look like from above. For this, you’ll need to use a pistol.

To get into the isosceles stance, square up to your target, keep your feet shoulder-width apart and your toes pointed directly forward. Keep your arms fully extended, bringing the pistol up to the middle of your chest. The shape created between your torso and arms should form an equal triangle when viewed from above. 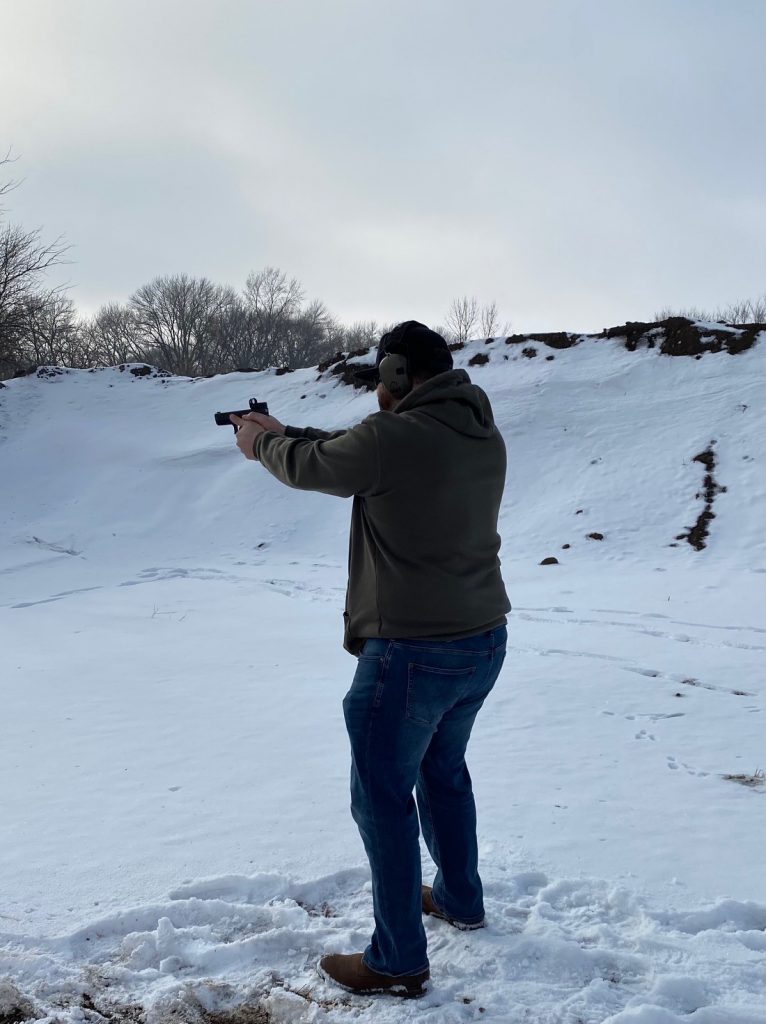 Easier to get knocked down, since your feet are side by side rather than staggered.
With the feet parted equally at shoulder width, there is little recoil control.
Since you are square with the target, you leave a larger portion of your body exposed.

Isosceles stances are often seen in shooting competitions and other highly reactionary situations, like a shoot out because it’s so easy to shift between subsequent targets.

If you’re trying to hit the target without question, it may be best to avoid this stance. Whether you’re hunting animals from a distance, for example, or otherwise have a few moments to draw a proper bead, go with another option.

Similar to the Weaver stance in terms of foot position, the Chapman stance places your feet at about the width of your shoulders, with your dominant leg slightly to the rear of the weak, and knees bent. Your toes will point straight in the direction of the target, but keep your torso angled.

Arm placement is where the two stances differ. Unlike the Weaver, where the shooter keeps both elbows bent, the Chapman keeps the shooter’s dominant arm extended and the supporting arm bent. If shooting with a pistol, you can tilt your head over your dominant arm and mimic a more rifle-like style of shooting.

With the option to play with feet angles, you can create an even slimmer profile to shrink your impact zone.
With a fully extended dominant arm, the Chapman controls recoil and absorbs energy output better.
Easier for those that don’t have considerable upper body strength.
Can be used with both pistols and rifles.

With an angled torso, you can’t shift as well side to side.
It’s not ideal for cross-dominant shooters.
Slower to assume in comparison to other types of shooting stances on this list.
Exposes the portion of your torso not covered by body armor.

The Chapman stance is versatile and effective and can be used whenever you have enough time to assume the position, take aim, and make your shot.

It’s best to avoid this type of stance when wearing body armor, as the sharp angle of your torso exposes your side that’s uncovered. In addition, self-defense scenarios most likely won’t give you enough time to assume the Chapman.

The final stance on our list is retention and is mostly left for personal protection using a pistol. Even though it’s a simple concept, and designed for close-range shots, it’s one of the hardest draws to master. But, if you can master it, you’ll have a self-defense technique that prevents attackers from stealing your gun.

The essence of this stance can be summed up by the phrase, “Elbow up, elbow down.” As the attacker approaches and you start to undo holster retention, draw your pistol by sharply thrusting your elbow up. Then, quickly drop your elbow down and into your side, while firming up your grip to fire.

Minimizes the ability for an attacker to disarm and acquire your firearm.
Great for short-range shooting at large targets.

Not useful at mid to long-range, only used in close combat.
The least accurate of any stance on the list.
Pistols with barrel porting or muzzle brakes can eject harmful gasses onto your skin.

As stated before, the retention stance is for use only in emergencies and is ideal for protection against an approaching attacker.

Unfortunately, the retention stance is pretty difficult to practice at the range. You most likely won’t use it unless you’re a police officer, security guard, soldier or other type of professional that deals with violence on a day-to-day basis.

All of the stances above provide their own unique advantages in different scenarios. Whichever one you choose, remember that practice makes perfect. In an emergency situation, instinct needs to take over, and that comes from perfecting multiple shooting stances. Give it some time to find out which one works best for you, and provides the most accurate, consistent shot.

If you’re searching for something that improves your shooting accuracy while reducing recoil and ear-damaging noise, a silencer is a perfect tool to add to your arsenal. We’ve made it as easy as 1-2-3 to purchase a suppressor. We deal with the paperwork, ATF, and other legal nuances while you wait for your new silencer to be delivered straight to your door. Interested in learning more? Shop our full selection of silencers online or get in touch with our team today.

A Better Approach to Hearing Protection for Hunting