Silencer vs. Suppressor: Is There a Difference?

We often get asked questions about silencers, such as how to buy a silencer or how to clean a silencer, that experienced users deem simple but are important questions for new gun and silencer owners. Thanks to misrepresentation in the media and politics about silencers, muzzle brakes, flash hiders, suppressor accessories, and even the simple act of barrel threading, it’s only logical that there is some confusion out there.

So, we are going to look at the various things you can screw onto the end of your rifle or pistol’s muzzle, what they do and how they work. If you already know this, great! Share this post to a new gun owner, or even an anti-gunner who has been left behind through media propaganda. And if you don’t know, read on!

Silencers and Suppressors: One in the Same

There is no difference between a silencer and a suppressor, and the terms are 100 percent interchangeable. Whether someone uses the term “suppressor” or “silencer,” they’re referencing the exact same thing. So why the different names, you might ask? Well, we must go back to the very beginning, with the invention of the Maxim Silencer. Invented by Hiram Percy Maxim, son of the famous machine gun inventor, the Maxim Silencer was patented in 1909 and was the first successful silencer on the market.

Now, truth in advertising laws were lax to nonexistent back then and breathtaking claims were the order of the day. Maxim advertised that his crude device made of stamped sheet metal baffles stacked inside a steel tube would render a firearm silent. This is pretty much impossible, even today unless you use a highly engineered device with carefully crafted subsonic ammo or low powered rimfire ammo.

In other words, a silencer isn’t exactly a “silencer.” It’s more like a muffler (which Maxim went on to develop for cars) or a device for suppressing sound. You know, a suppressor.

However, the name “silencer” stuck. Later on, shooters and manufacturers promoted the more accurate “suppressor” to reflect the reality of these devices.

Silencer vs. Suppressor – Does It Matter What You Call Them?

Probably not. After all, we are Silencer Central, and we sell the famous BANISH Suppressor, which shows how interchangeable the terms really are. But because the term “silencer” is so heavily ingrained in modern usage, it is as viable a term as “suppressor.” The difference between a silencer and a suppressor? Absolutely none.

Perhaps the only real problem now is that with two competing popular terms, folks can get confused — and that’s understandable. After all, the two really do sound like similar but different devices. But rest assured, there’s no difference and you can call a silencer a suppressor, or a suppressor a silencer. It’s completely up to you.

Now that we’ve cleared up the gun suppressor vs silencer question, let’s look at another area of confusion…

If suppressors are silencers, then are flash suppressors also silencers? Well, no they aren’t. While both devices are designed to suppress aspects of muzzle gas, they do two radically different things. 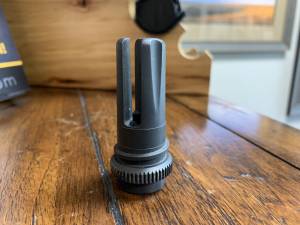 What is a Flash Hider?

Flash suppressors are intended for the benefit of the person shooting the gun and reduce or almost eliminate the visual flame from a barrel under low light conditions. This makes it easier to see and is invaluable for self-defense situations and when hunting in low light conditions.

How Does a Flash Hider Work?

There are various sorts of flash suppressors on the market today that work in a number of different ways. Some are little more than cones or cans that contain and disperse the flaming gasses at the muzzle long enough for them to burn off or cool down. Others redirect the gas and flame in order to drive it away from the shooter’s field of vision. 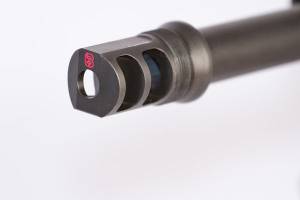 Why Are Flash Suppressors Regulated in Some States?

That’s a good question. The simple answer is fear and moral panic. Some people believe the purpose of a flash suppressor is to hide the gun and make it stealthier in use. Other people think that anything that makes a gun easier, more ergonomic or more comfortable to shoot somehow means the gun will magically kill people and be used in a crime. These misconceptions are often deliberately promoted by media and anti-gun crusaders, and sometimes reshape how the general public understands guns.

States like California which have an aversion to civil rights are busy making sure law-abiding citizens can’t reduce a bit of visual flash on the end of their self-defense pistol, hunting rifle or sporting carbine. This is simply because they think a bit of metal with notches cut in it or a metal cone turns a rifle into an assault rifle of some sort. There is no rational reason to regulate these very common devices, save for the desire to attack our gun rights and shared freedom.

Gun silencers and suppressors are two terms the same thing with each name born out of a different era in American history and marketing. They can be and are used interchangeably without affecting the meaning.

However, flash suppressors and sound suppressors are radically different devices doing different things, although a sound suppressor combines both functions due to the nature of how it operates. Hopefully, this clears up some confusion on seemingly identical and sometimes conflicting sounding terms.

Want to learn more about silencers? Visit our products page and look over our line of suppressors.

Feel free to give us a call at 888.781.8778 or email customerservice@silencercentral.com to learn which one is best for you and how to buy it.