A man from Brookings was sentenced to more than six years in federal prison last week for possession of a silencer.

So are silencers legal or not? Sioux Falls residents who read that story about Neiko Currie’s crime might have been confused by that. It’s difficult to drive through town without seeing billboards advertising the legal services of “Silencer Central.”

The short answer is yes. But that doesn’t mean you can’t get in trouble for having one.

The process for obtaining a silencer legally is time-consuming, expensive and about to change, thanks to this month’s executive orders from President Barack Obama.

We’ll get to the change eventually, but first let’s lay out some basics:

Silencers, machine guns and certain types of explosives are regulated under the National Firearms Act, said Frank Kelsey, special agent in charge for the Bureau of Alcohol, Tobacco and Firearms in Sioux Falls.

Each of those items carries a serial number, which is registered with the manufacturer and logged with the ATF. When a regular person wants to get one, he or she applies as an individual or through an entity called a gun trust to have the item’s registration transferred.

The person pays a $200 tax, and voila! They have a silencer or NFA weapon.

“You pay that tax, and you’re good to go to own it,” Kelsey said.

Sounds easy, right? Well, not exactly. To buy as an individual, you need to give the ATF your fingerprints, a photo and a permission slip signed by your local sheriff. You submit your forms and wait, sometimes for eight or nine months.

If you buy through a gun trust, which allows you to share the weapon or silencer with a specific group of people, you don’t need to submit all of that, but you still have to wait and pay the tax.

People get in trouble, Kelsey explained, when they try to bypass that process. One way to do that is by modifying an item called a “solvent trap,” which is essentially an oil filter that screws onto the barrel of a gun to catch the cleaning agents as they drip through your firearm.

It’s a useful tool – especially if you have a lot of guns to clean – but it’s also tempting to turn the trap into a felonious NFA device.

“As soon as you shoot a round through that thing, you’ve created a silencer,” Kelsey said.

The moment you do that, you’ve committed what Kelsey describes as “a litany of violations.”

Currie tried to sell a homemade silencer online and wound up with a prison term. He was caught when the guy who wanted to buy it called the Brookings Police Department to ask if the transaction was legal. It wasn’t.

Kelsey said anyone who wants a silencer should do some research first and not just on federal laws. Silencers are illegal in 10 states. He also said it’s important for buyers to realize that an NFA item is a long-term commitment. If you’re going to move from a state such as South Dakota to a state like New York, you can’t just offload it through an online sale.

The best course of action is often to turn to a reputable specialist dealer such as Silencer Central, Kelsey said, because they’re familiar with the laws and the process.

Silencer Central is based in Sioux Falls but operates in six states, according to CEO Brandon Maddox.

There are plenty of reasons to consider a silencer, he said: It improves accuracy for long-range shooting, lets a user shoot without ear protection and lets them shoot without disturbing the neighbors.

Ridding your property of prairie dogs or coyotes is another selling point. If there are three coyotes huddled in a circle and you shoot one with a silenced rifle, the other two “don’t know where the shot came from,” Maddox said.

Maddox helps guide customers through the transfer process and is doing brisk business these days. The number of people applying for silencers has skyrocketed over the past decade, and most of them are using the gun trust model.

The number of people applying for transfers through a trust reached 90,000 in 2014, according to the ATF.

More controversially, the ATF can’t do a background check on a trust, so its members get to bypass the sheriff’s signature, photo and fingerprint rules. Maddox does a background check on the person who picks up the silencer in a trust purchase, but the rest of the people in the trust don’t get one. 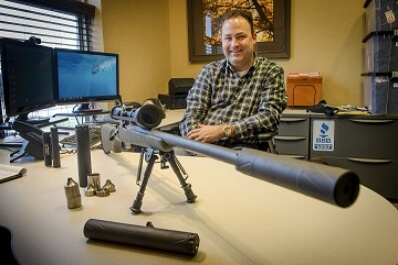 Minnehaha County Sheriff Mike Milstead began to notice a change about five years ago as dealers and trade publications began pushing the gun trust model. Milstead used to sign “quite a few” of the federal forms for NFA items, but he doesn’t see many now.

“There was a significant change when they started promoting those gun trusts,” Milstead said.

Gun-control advocates have called the phenomenon the “gun trust loophole.”

That brings us back to the change in procedure mentioned earlier. On Friday, Obama’s recently announced executive orders on firearms were published in the Federal Register. One of them is meant to close that loophole.

Starting July 13,* barring legal action that blocks the change, the rules will take effect and any “responsible party” listed in a gun trust will need to submit his or her photo and fingerprints to the ATF to be eligible for a silencer or machine gun transfer. The sheriff’s signature requirement will go away, replaced with a requirement that the applicant notify the sheriff.

That means silencer sellers are even busier than before, Maddox said.

“We’re seeing a huge boom in sales because everybody wants to get in before the rules change,” Maddox said.

Kelsey encourages those with questions about what is or isn’t OK to call the local ATF office at 605-782-8200 or visit ATF, which lists volumes of information on regulations, question-and-answer sections and executive actions.

John Hult is the Reader’s Watchdog reporter for Argus Leader Media. Contact him with questions and concerns at 605-331-2301 or 605-370-8617. Find him on Facebook at www.Facebook.com/ArgusReadersWatchdog.