What’s the Best Varmint Caliber? Here are the Top 5 Options

A varmint hunt is an experience unlike any other form of hunting. You’re aiming for a target that is smaller than any form of big game hunting, meaning that you’ll need to rely on as much accuracy as you possibly can in order to achieve successful results. Because of that, you’ll want to be sure to do some research to find the best varmint caliber out there.

What to Look for In a Varmint Cartridge

Varmint hunting provides a unique set of challenges for hunters. While any big game rifle will certainly be successful in killing any varmint, it may be overkill and may not give the hunter the best performance possible. There are three main factors that you want to look for when choosing a varmint cartridge — accuracy, speed, and distance. 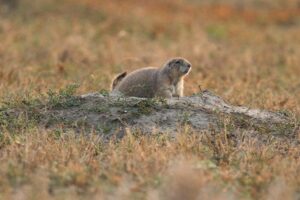 First and foremost, when you’re hunting varmints, the first thing you’ll need to focus on is accuracy. Varmints include small and shifty creatures like coyotes, groundhogs, prairie dogs, raccoons, and foxes, which can be much more difficult targets to hit than animals like deer, elk, or moose. This means that you’ll need a cartridge that provides you with the most accurate shot you can possibly get. Even if you’re the best shot in the world, if you don’t have a cartridge that is optimized for accuracy, you won’t have much luck in the field.

As mentioned earlier, varmints are incredibly shifty creatures. They’re all notoriously fast animals that can duck in and out of your line of sight within milliseconds. You’ll want a cartridge that will travel from the barrel of your rifle to the target as quickly as possible. While each cartridge coming out of any rifle is going to be moving at a fast speed, there are some that travel faster than others. When you’re varmint hunting, speed is a crucial element of success, so you’ll want to shell out for the fastest cartridges you can find.

Varmints often possess incredibly acute senses. Since they are such small animals, they’ve evolved acute senses in order to combat the fact that so many predators in their environment want to kill them. It’s nearly impossible for a human hunter to sneak up close to a varmint undetected, meaning that you’ll likely be taking your shot from a long distance. This requires you to use a cartridge that is capable of effectively hitting a target from a long distance while maintaining true to the shot line of the rifle.

With these three factors in mind, we’ve created a list of five of the best varmint cartridges available.

Here are our picks:

The .17 Winchester Super Magnum is one of the newer cartridges on the market, but it’s made plenty of noise since it’s arrived. This cartridge is capable of pushing a 20-grain bullet at 3,000 fps, which makes it a reliable cartridge up to 300+ yards. It’s also large enough to take down a varmint up to the size of a coyote, which is a great combination of power and precision.

If you’re aiming for something on the larger end of the spectrum for varmint hunting, then you’ll want to go with a .243 Winchester. This do-it-all caliber is powerful enough to take down a deer while containing the ability to send a 58-grain bullet over 3,400 fps. Many hunters love it on a windy day, and it’s reliable enough to hit any target well over 300 yards. However, if you’re hunting a smaller varmint like a squirrel or a prairie dog, it may be more than you need. You’ll want to use this cartridge for any varmint that’s on the larger end of the spectrum.

If you’re looking for as much accuracy as you can possibly get, then one of the first places you should look is the .204 Ruger. It can accurately send a 32-grain bullet at over 4,200 fps and is quite popular for any hunter who is hunting any animals like foxes or groundhogs. It can be tough to find ammo choices for this caliber, but if you do, you’ll likely be happy with what you find.

If you’re going to be shooting smaller varmints from a long distance, then you’ll love using the .220 Swift. This caliber can shoot a 35-grain bullet at a speed of well over 4,400 fps, making it a very popular choice amongst all sorts of varmint hunters. Unfortunately, it can only be used with custom guns and barrels, but if you have the option to use it, it’s a great varmint cartridge that can get the job done.

If you’re looking for speed, accuracy, and devastating impact at long ranges, then the .22-250 Remington is a great option. Skilled hunters can use this cartridge to regularly hit a shot from 400+ yards away, and it’s billed as one of the fastest cartridges available with the ability to shoot a bullet over 4,400 fps. When it comes to taking long shots at small targets, this varmint cartridge takes the cake.

Still, have some questions about varmint calibers? We’ve got the answers you’re looking for!

The best long-range varmint caliber would likely be the .22-250 Remington. Even an average shooter can reliably hit a target from hundreds of yards away using this caliber, and the flat-shooting ability of the cartridge makes it a fan-favorite amongst hunters of varying experience levels.

A coyote is the largest animal that classifies as a varmint, meaning you’ll need a powerful varmint caliber in order to get the job done. The .243 Winchester is probably the best option for you to choose. It may not be as fast or as accurate as some of the other cartridges on the list, but coyotes also aren’t the smallest nor the quickest varmints that you can hunt. 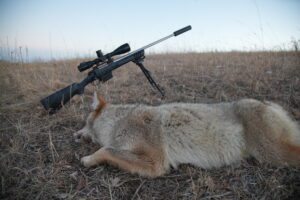 What this cartridge lacks in speed and accuracy is more than made up for in pure power. As mentioned earlier, a .243 Winchester is powerful enough to take down a deer, so you can rest assured that any coyote hit with this caliber is sure to go down.

Check out our guide to the best cartridge for each type of game if you’re a regular hunter and don’t just stick to varmints.

The .223 Remington cartridge is a powerful and accurate cartridge that you can rely on to take down a coyote. It can propel a 55-grain bullet at over 3,000 fps, making it plenty strong enough to stop a coyote in its tracks. Some hunters prefer a smaller cartridge so that they can preserve the hide of the animal, but if you’re just hoping to do some pest control, then this cartridge is the perfect addition to your ammunition drawer.

Get the Upper Hand on Your Prey

When you’re varmint hunting, you’re going to want to utilize every advantage that you can. One of these advantages is keeping the element of surprise by hunting with a suppressor from Silencer Central. A suppressor can help you maintain stealth when you’re hunting, which will keep the varmints in an unsuspecting state and improve your odds of success. Learn more about how Silencer Central can help you on your varmint hunt today!