Alright, who’s ready for another caliber debate? When it comes to .300 Weatherby and .300 Winchester Magnum, is one really better than the other? The short answer is “yes, if” and the long answer is “no, but.”

Both the .300 Weatherby and the .300 Win Mag are great cartridges, but as with all things, they’ve each got pros and cons, advantages and drawbacks. We’ll take a look at some of the most common things you’ll want to consider when deciding which caliber of the two is right for you.

Cost of Each Gun

For most of us, the cost of something is definitely a deciding factor when it comes to almost everything we buy. Guns are no exception. They are important tools and it’s equally important to weigh the benefits of what you’re getting out of a gun when compared to how much you’re going to spend on it.

Since the .300 Weatherby cartridge is a proprietary round specially designed by Weatherby, it should come as no surprise that the biggest market share of rifles chambered for this caliber are made by Weatherby, too. There are a small handful of other companies producing rifles in this caliber, but they are definitely not the norm. As a result, Weatherby sort of has the market cornered in rifles chambered for .300 Weatherby.

That said, Weatherby offers a wide variety of different rifle models and configurations for this caliber. That means you can spend as little as $750 or more than $3,000. Your bank account (or available credit on your card) is the only limit!

The .300 Win Mag is not a manufacturer-specific cartridge, so you won’t find the limited marked availability of rifles when it comes to this caliber. There are dozens of different companies making rifles for this round at a wide variety of price points. New guns can be had for as little as $500 all the way up to $5,000 or more.

Size and Weight of the Rifles

Generally speaking, you won’t notice a difference in the size and weight of rifles chambered in either .300 Weatherby or .300 Win Mag. The two cartridges are very similar in size, but they do have some subtle differences that, for the very perceptive shooter, may have an impact on the weight of the gun when loaded.

Of the two cartridges, the .300 Weatherby is the longer of the two, with an average measurement of 3.55″ in overall length. Bullet weights range anywhere from 150 grains up to 220 grains.

The .300 Win Mag is a bit shorter, with an average measurement of 3.34″ in overall length. Bullet weights range anywhere from 150 grains to 190 grains. 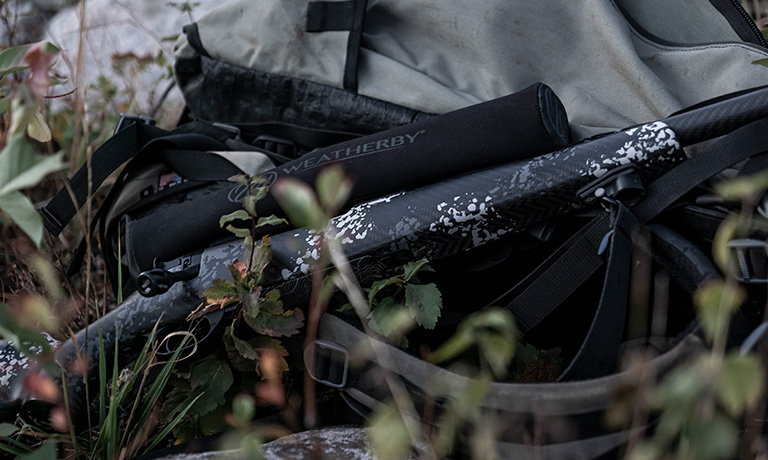 What is the main way you intend to use your new rifle? Answering that question can help you determine which caliber to choose and the exact type of rifle to select in that caliber. Some guns and calibers are better suited to certain applications than others, and if your intended use doesn’t match the caliber’s capabilities, then it becomes an easier choice to make.

Whichever you choose, they’re both perfectly capable of taking the entire range of game animals in North America, and both are well-suited for a light rifle on safari in Africa.

The .300 Weatherby is a fast, hard-hitting cartridge, driving a 180-grain bullet to a muzzle velocity of 3250 fps with over 4,000 ft.-lbs. of energy at the muzzle. This means that the .300 Weatherby has a flatter trajectory and better resists wind deflection, but the trade-off is an increase in recoil.

If you’re shooting at great distances, then this is the better of the two rounds, but for many people and purposes, it is more powerful than what is really needed.

With a muzzle velocity of 2960 fps, the .300 Win Mag is the slower of the two cartridges. When sighted in at 200 yards and using 180-grain bullets from each, you’ll notice more drop and less energy from the Winchester cartridge than the Weatherby cartridge once you get out to longer distances.

Right now, finding ammunition is harder than it has ever been before. Unless you’re shooting a really obscure cartridge, it can be a challenge to find the most popular cartridges – especially if you wait to start looking until right before hunting season begins.

Generally speaking, it’s easier to find .300 Win Mag ammo than .300 Weatherby ammo because there are more than twice as many companies making the former than the latter.

The .300 Win Mag would be considered a “mainstream” cartridge in comparison to the .300 Weatherby. Currently, there are nine companies that produce different .300 Win Mag loads.

While appearance has little to do with performance (except in the case of adjustable stocks, barrel fluting, etc), very few purchases of any kind are ever made solely on how they perform with little to no thought given as to how they look.

Weatherby produces a wide variety of different models and configurations of rifles chambered for .300 Weatherby. You can choose from a variety of stock materials including wood, laminate, synthetic, polymer, and more in an equally wide variety of colors and camo options. Barrels can be fluted or not, and the metal can be blued, stainless, or treated with CeraKote in a specific color or pattern.

The guns chambered in .300 Weatherby, there’s an even wider variety of appearance options to choose from because there are many more rifle companies making guns in this caliber. You can find all of the same varieties and options mentioned for the caliber above to get a gun that’s appearance is specifically suited to your tastes.

So, Which One is Better?

When it really comes down to it, there’s no right or wrong answer when deciding if the .300 Weatherby is better than the .300 Win Mag or vice versa. They’re both fantastic cartridges that have proven themselves in the field for decades. Each one has loyal followers who swear by it and nothing else.

Of course, that’s all just personal preference. The answer as to which one is better is totally up to you, and whichever one you decide to go with is definitely the right answer.