Upon learning of their existence, you may have asked yourself, “Wait a minute, fake suppressors are real products?”

Then, because you know that there are a whole slew of special federal, state, and local laws surrounding real suppressor ownership, your next question was probably, “Are fake suppressors legal?”

The answer is yes. Fake suppressors are legal.

Now that we’ve got that out of the way, you’ve probably got some more questions. This article will go through some of the most commonly encountered questions people have about fake suppressors.

Here’s what we’ll cover in this blog:

What Constitutes a Fake Suppressor?

A fake suppressor is exactly what its name says it is. It’s an object that attaches to the end of the barrel of a firearm that looks like a suppressor but does not actually offer any of the sound reduction benefits of a real suppressor.

Often made of the same or similar materials such as aluminum or steel, finished with the same external coatings, and able to be attached to a barrel in similar manners, fake suppressors look like the real deal from the outside. The only way to know for sure if it’s real or not is to shoot one and see how it sounds, or to take a look inside, either via x-ray for a sealed can or by taking it apart yourself as you can do with our entire BANISH lineup. 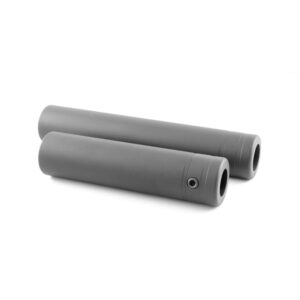 The internal makeup of real and fake suppressors is what sets them apart. Real suppressors have baffles inside of them designed to mitigate the gases from a cartridge when it is fired. This gas mitigation is what causes the reduction in sound.

Fake suppressors, on the other hand, do not have internal baffles. They are not designed to mitigate the gas in any significant way and do not reduce sound.

The Legal Difference Between Fake and Real Suppressors

There is a huge legal difference between fake suppressors and real suppressors.

Fake suppressors can be purchased instantly, are much cheaper, require no background check, no registration, no photographs, no fingerprints, and no $200 tax stamp. In short, fake suppressors are not subject to any of the NFA restrictions that govern real suppressors. They’re just like any other non-NFA gun part that you can buy without all the hassle.

Real suppressors are the exact opposite of what’s listed above: they cannot be purchased instantly, they’re more expensive, they require a background check, registration, photographs, fingerprints, and a $200 tax stamp. This is because real suppressors are subject to all of the NFA restrictions under federal law.

What about Solvent Traps?

The short answer to this question is that solvent traps are not suppressors – real or fake. That said, a longer answer is required.

First off, solvent traps in their unmodified condition are not real suppressors because they do not reduce sound. At the same time, they’re not fake suppressors, either, because you cannot shoot through them. As the name implies, they’re designed to trap solvent, and this would be impossible if there were holes in both ends.

Modification of solvent traps has become a popular way for people to make real, legal suppressors by following the laws and registering them, and paying for the tax stamp on what is known as an ATF Form 1 before actually modifying the trap into the suppressor.

Unfortunately, people have started using solvent traps as suppressors without going through the required legal steps. This has led to a new level of government scrutiny surrounding the purchase and possession of solvent traps.

What are the Pros of a Fake Suppressor?

Believe it or not, there actually are some pros to fake suppressors.

The biggest pro is the lack of regulation. There’s no lengthy process to own one and they have no extra costs associated with them.

Fake suppressors, like real suppressors, will still add weight to the end of your host gun’s barrel, and there are times when this can be beneficial. Having some extra weight upfront can help mitigate recoil and lead to better shooting performance.

In addition to added weight, fake suppressors also add length to your host gun’s barrel. Because there are restrictions and laws governing short barrel rifles (SBRs), permanently attaching a fake suppressor to a shorter barrel allows you to meet the barrel length requirement and have the look of an SBR without going through all the legal rigamarole.

Finally, most people think suppressors look cool. They’ve become a big part of what makes a gun “tacticool,” and adding a fake suppressor to a gun gives it the tacticool look without the legal process.

What are the Cons of a Fake Suppressor?

The world of NFA items, which includes real suppressors, can often be confusing to people who don’t own any of these products.

As was mentioned above, there’s the “tacticool” benefit of a fake suppressor, but because they look real, they might still draw unwanted attention at the range. There are some people who still think real suppressors are illegal (they’re not; they’re legal in 42 of 50 states) and they might hassle you about the legality of a product that is actually irrelevant to their argument.

Worse yet, if you encounter law enforcement with a fake suppressor, they may not realize that it isn’t real. If they ask to see your NFA registration paperwork and you rightly don’t have any because what you own isn’t a real suppressor, it could lead to a temporary headache until the confusion on their part gets cleared up.

Are Real Suppressors Worth the Investment?

Sure, real suppressors come with some extra hoops and costs that can be avoided with fake suppressors. But that’s really not the point when it comes to suppressors.

The only legal way to enjoy the benefit of a real suppressor (manufactured or DIY) is to go through the process of registering one, paying the tax, and waiting for it to be approved. Yes, it can be a pain, but it’s totally worth it.

Plus, Silencer Central has made the investment in a suppressor easier than ever. We’ve been in this business for more than 15 years and our top-notch staff can help you pick the right real can for your needs. We’ll walk you through our super-easy ordering process and even set you up on an interest-free payment plan if you’d like. Plus, once your stamp is approved, we’ll mail your new suppressor right to your door!

Give us a Call Today!
Featured products