Suppressors do a great job of lowering the decibels of a gunshot down to a hearing-safe level, but there’s one thing they cannot do: eliminate the supersonic crack made by the bullet as it breaks the sound barrier.

That can only be accomplished by special subsonic ammo, and when you pair the two together, the result is magical. It won’t be silent by any stretch of the imagination, but it will definitely be quieter.

So what exactly is this magical ammo, how is it made, how should you use it, and what limitations does it have? Let’s dive in and find out!

What is Subsonic Ammo?

As was mentioned above, when something breaks the sound barrier and makes a cracking sound as it does so, that object is considered to be supersonic, moving faster than the speed of sound.

When an object is moving slower than the speed of sound and doesn’t make that crack, it’s considered to be subsonic.

As a result, subsonic ammo is a specially calibrated load that is designed to travel slower than the speed of sound, thereby eliminating the supersonic crack.

Obviously, the biggest advantage to using subsonic ammo is when you pair it with a suppressor. In a caliber such as 9mm, using a pistol suppressor like the Banish 45 will bring the decibels down to a hearing-safe level even with supersonic ammo.

When you pair a suppressor with supersonic ammo, that’s when you’re in for a real treat! The decibel level will be even lower and you’ll really see why the combo of a suppressor and subsonic ammo is so very cool.

Subsonic ammo can also reduce some of the recoil, and when you pair that with a suppressor, it makes for a very pleasant experience if you’re introducing a new shooter to the world of firearms.

Ammo that is specifically made to subsonic specifications tends to be more expensive than its supersonic siblings. With ammo prices the way they are right now, that definitely makes a big difference when picking up a few boxes here and there. That extra cost adds up.

Another drawback directly relates to one of the benefits listed above: recoil. In a semi-automatic firearm, there has to be enough power in the leftover gases to cycle the action of the gun. Since subsonic ammo is inherently less powerful, you could find yourself in a situation where a specific subsonic load in a specific gun with a specific suppressor won’t cycle the action on its own.

How is Subsonic Ammo Made?

Subsonic ammo is made in two ways. The first is through regular production of calibers that are inherently subsonic and don’t break the sound barrier in a regular load. These include calibers such as .45 ACP and .380 ACP.

The other way subsonic ammo is made is by altering the loading of a supersonic cartridge so that it travels at subsonic speed. As an example here, we’ll take a look at the most popular handgun cartridge out there: 9mm.

The first way to make a subsonic load is to use a heavier bullet since they travel slower. The most common target load for 9mm bullets is 115 grains, but a heavier bullet of 147 grains will be subsonic. The other way is to reduce the powder load. Decreasing the amount of propellant in the cartridge means the bullet will be moving slower when it exits the barrel.

There are a bunch of subsonic 9mm ammo options on the market, so how do you choose the best one? The best answer is to buy a few different kinds and try them out with your guns and suppressors to see what works best. This is primarily because of the final drawback we listed above.

Nonetheless, here are a few subsonic 9mm ammo choices to get you started.

Subsonic 9mm loads from Bullets 1st use 147-grain projectiles traveling at 1,020 feet per second. This provides a balance between speed and supersonic qualities since it is flirting with the supersonic sound barrier of 1,125 feet per second.

Using 124-grain projectiles, Federal American Eagle subsonic ammo travels at 1,030 feet per second. Like the Bullets 1st option above, you get a nice balance between speed and sound, plus the extra speed helps cycle a semi-auto firearm.

Magtech’s subsonic 9mm loads use 147-grain FMJ bullets. Out of a four-inch barrel, these heavier bullets are moving at 990 feet per second – fast, but definitely below the normal supersonic sound barrier.

Fiocchi’s subsonic 9mm ammo is loaded with an even heavier bullet than Magtech’s, weighing in at 158 grains. At 850 feet per second, it’s traveling well below the supersonic level. 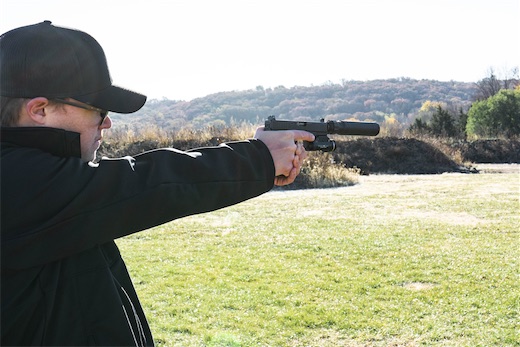 By now, you’ve done the math and figured out that the equation of “subsonic ammo + silencers = quiet fun.“

If you’ve never shot suppressed with subsonic ammo, it’s such a cool experience. Once you try it, you won’t ever want to shoot any other way!

Remember, though, that not all combinations work the same, so you may have to try a few different loads if you’re going to be shooting suppressed 9mm subsonic ammo through different types of semi-auto firearms. On the plus side, that translates into more range time!

Silencers don’t make guns silent, even when used with subsonic ammo. That entire concept is an uninformed myth propagated by movies and the media.

However, they do make a difference. Suppressed supersonic ammo is definitely louder than suppressed subsonic ammo. If you’re going to be doing a lot of shooting, the difference between the two really stacks up when it comes to helping preserve your hearing and avoiding disturbing anyone within earshot of your safe shooting space.

Alright, you’ve done the math and solved the equation above and discovered that shooting suppressed 9mm ammo is a ton of quiet fun. Now that you’ve done the work on paper, it’s time to put it into use in real life!

When you’re reading to start shooting suppressed subsonic ammo, give Silencer Central a call. We’ll get you set up with the right suppressor for your needs. Plus, we’ll break the payments up with our interest-free EZ-Pay plan, do all the paperwork for you, and then mail your suppressor right to your door once it’s been approved.

It doesn’t get any better or easier than that, so what are you waiting for? Let’s get you started today!

Everything to Know About the U.S. Ammo Shortage for 2022