Here are the Most Versatile Suppressors Available in 2022

Buying a silencer is a big investment in both time and money. First, you’ve got to spend time researching what you want. Once you decide, then you’ve got to pay for both the suppressor and the tax stamp. Then you’ve got to spend more time waiting on the ATF to give you their blessing. Once you get the first one, you realize you want another one. Now the process starts all over again, and you’re stuck paying Uncle Sam an additional $200 each time – not to mention the wait time for each one, too.

This is why it’s good to look at a suppressor that offers as much versatility as possible. You want it to be of the best quality, best sound suppression, best price point, and, of course, have the best versatility. This maximizes your suppressor’s potential and saves you time and money in the long run.

Instead of shelling out extra tax stamp money and extra can money, you can save some of that hard-earned cash by buying a versatile suppressor. Let’s take a look at some of the most versatile suppressors on the market right now. Here’s what we’ll cover, so feel free to jump around if you’re looking for something specific.

SilencerCo’s Omega 36M really has the whole modular (and thus, versatile) concept down to a science. Made of highly durable stainless steel, you can safely use it on magnum rifles, 9mm pistols, and even sub guns. This suppressor was designed to accommodate your caliber needs up to .338 Lapua, so that makes the Omega 36M unique and highly versatile.

The versatility of being able to change sizes from long to short is a big plus, too. The short configuration is under six inches and the long configuration is just over seven and a half inches, so that means that you can configure this suppressor to fit your specific application without having to sacrifice sound or space. Need it to cut down the decibels as much as possible? Run it in the full length configuration. Clearing houses or working in other tight spaces? Shrink it down to the shorter size. It’ll be more mobile, but still have great sound suppression.

Versatility also carries over to the Omega 36M’s mounting options. Featuring a durable lock-ring, this suppressor is compatible with the Charlie mounting systems, including the ASR, direct thread, 3-lug, and piston housings.

Runner Up Most Versatile Suppressor

Choosing a runner-up is hard. No one likes being second best, but we don’t look at it like that with our runner-up for the most versatile suppressor money can buy. You could easily swap places with our top two.

If money was no object, then you might not mind buying a wide assortment of suppressors that are limited-use or caliber-specific/caliber-restrictive. If, however, you’re like the rest of us, you want to get a silencer that will handle just about any caliber – be it rifle or pistol – that you have in your safe.

With the SilencerCo Hybrid 46 suppressor, that’s exactly what you get. As the name suggests, this silencer allows for the hybrid use of both rifle and pistol calibers with the convenience of just one can and one tax stamp.

Made of titanium and stainless steel, the Hybrid 46 is both full-auto and magnum rated, so don’t be afraid to take it out and really put it through its paces!

We may be a bit biased, but we think our BANISH 30 Gold is the most versatile rifle suppressor on the market today. If you’re in the market for one suppressor to handle all of your rifle needs, then this is the suppressor that you want. You might think we’re not being fair by putting our own product here, but since we literally designed them to be the best overall .30-caliber rifle suppressor, we feel confident putting them where our engineers intended. 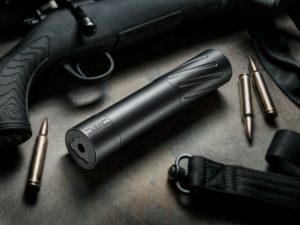 The most versatile suppressor in our BANISH lineup of suppressors, the BANISH 30 Gold is rated from rimfire calibers all the way up to .300 RUM. Tests have shown that it can bring .308-caliber rounds down by a whopping 34 dB, making it hearing-safe.

What distinguishes the BANISH 30 Gold suppressor from our other BANISH 30 is that it comes with some added design features and included accessories. Unlike our standard BANISH 30, this Gold model is a quick-detach that comes with two different muzzle brakes, a suppressor cover, a suppressor pouch, a baffle removal tool, and some Silencer Central swag: a shirt and sticker.

Again, you might not like that we’re putting our own product on here, but just hear us out before you dismiss this choice for the most versatile pistol suppressor.

The BANISH 45 motto is “one suppressor, one tax stamp, many guns” and it definitely lives up to it. As the name would suggest, the BANISH 45 is designed for .45-caliber cartridges, but it’s far more versatile than that.

Standard .45ACP is, by its very nature, subsonic. This makes it really easy to suppress and a popular choice if you want a quiet yet beefy cartridge. Of course, not everyone shoots .45ACP. Some people prefer 9mm or even 10mm. The BANISH 45 handles both of them with ease.

With the rise of .300 Blackout as an incredibly popular caliber for AR-style pistols, we figured that the “many guns” part of the motto ought to extend to that caliber as well. As such, the BANISH 45 is capable of handling subsonic .300 Blackout rounds as well.

Whether you’re shooting the small .22LR, stepping up your game to 10mm, or anything in between, the BANISH 45’s versatility allows it to accommodate all of those. Obviously, barrels on a .22 are considerably smaller than those of a 10mm, so you can choose from seven pistons with different thread options so that you can fit your BANISH 45 onto the gun barrel of your choice.

Made of lightweight titanium and aluminum and able to change between two sizes means that this suppressor can be an incredibly compact can, while sacrificing very, very little. In fact, when shortened to 6.7” it weighs just 9.6 ounces, making it the lightest suppressor in its class. Versatility, thy name is BANISH 45.

Rimfire rounds are notoriously dirty to shoot. Since the very nature of a suppressor is to capture what comes out of the barrel, this means your rimfire is going to get very dirty, too. Dead Air’s MASK-HD allows for easy disassembly from both ends for easy cleaning. Plus, with its compressed-K configuration, it’s a compact unit that has excellent sound suppression, almost no first-round pop, and runs about as clean as you can get from a rimfire suppressor.

Made from titanium and 17-4 PH stainless steel construction, this direct thread suppressor is compatible with FN 5.7, GSG, P22, and Sig Mosquito adapters for versatile use on multiple host guns.

It’s not the cheapest rimfire suppressor on the market, but you definitely get what you pay for with the MASK-HD. Dead Air is known for making great suppressors, and this one is no different. You won’t be disappointed.

“Big bore” can be defined by a wide variety of caliber definitions, up to and including the mighty .50 BMG. While there are people out there looking to suppress something that large (and yes, it can be done), it’s far more likely that “big bore” will generally mean a caliber in the .338 family for most people.

With that in mind, we chose the Thunder Beast Arms Corp (TBAC) .338 ULTRA suppressor as our most versatile option for big bore rifles. Essentially, TBAC took an already great product – their .338BA suppressor – and reworked it into something even better. How is that possible, you ask? Compared to the prior 338BA, the 338 ULTRA is 33% lighter, 2-4 dB quieter, and much stronger.

If we’re being completely honest, we couldn’t find a single negative review of this can – or any TBAC can, for that matter. Seriously; we looked far and wide and couldn’t find one! This is both a blessing and a curse. Due to the overwhelming popularity of this suppressor, it can be a hard item to find in stock. As with many items in the gun industry right now, demand is outpacing production, and the TBAC .338 ULTRA suppressor is no exception.

There’s a lot of versatility on this list, for sure, but there are plenty of other options out there as well, and it can be a daunting task trying to figure out exactly which suppressor to buy. If you’re still not sure which one to choose, don’t worry!

Our motto is “Silencer Buying Made Simple,” and we mean it! Silencer Central is here to make your buying process as easy and cost-effective as possible. We’re happy to help guide you on your journey to suppressor ownership. We offer free gun trusts with your suppressor purchase, free shipping, free thread protectors with barrel threading, and an interest-free e-Z Pay Plan.

With more than 15 years of experience in the industry, we’re the nation’s largest silencer dealer. We’re also the only one licensed in all 42 suppressor-legal states that can sell, process, and ship your new suppressor directly to your door. Our experts are ready to help you by phone or email, so what are you waiting for!