Product Feature Articles
Muzzle Brake vs. Compensator: Which is right for your rifle?
April 27, 2020 By Brandon Maddox

Muzzle Brake vs. Compensator: Which is right for your rifle?

Most rifle barrels in the past several years have come threaded from the factory so the shooter can add a muzzle device such as a muzzle brake or a compensator. This has recently extended to bolt-action and lever-action rifles more commonly found in the hunting as opposed to the tactical arena. Some come equipped with thread protectors and many come with a muzzle device.

Although the included muzzle device is typically a flash suppressor, some jurisdictions cling to antiquated and ill-informed laws that regard these devices as an “evil feature,” whereas a muzzle brake or compensator is perfectly legal.

Ironically, when the author served on active duty with the United States Marine Corps, the “A2 flash hider,” as it is known today, was referred to as the rifle’s compensator. This may have had more to do with the bottom port on that muzzle device being sealed or solid to prevent a Marine from raising dust or sand while firing from the prone position. At any rate, it shows how official definitions can be changed or overlooked over time.

What is a Muzzle Brake?

A muzzle brake is a device which threads onto the end of a firearm’s barrel. Although construction varies, the primary identifying characteristic is a series of cuts that direct the burning gases and muzzle blast of a fired round away from the shooter and most often toward the side or 180 degrees from the muzzle itself. 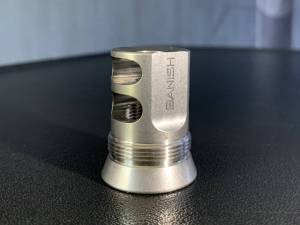 What Does a Muzzle Brake Do?

As most of the felt recoil from a firearm originates at the muzzle, this effort is primarily done to reduce recoil. Secondary benefits of muzzle brakes are byproducts of this as the reduction in felt recoil can aid the shooter with regard to accuracy and allow for faster follow up shots.

Some muzzle brakes, when used in conjunction with a suppressor, can act as a sacrificial blast baffle. This is not the same as a sound baffle, which decreases the sound signature of the firearm, but rather that the brake takes the brunt of the muzzle blast and fired gasses as opposed to the baffles in the suppressor itself. This tends to prolong the life of the suppressor.

The drawback to most muzzle brakes is that they can change the direction of the sound of the fired round. In some cases, the shooter may find the report of the weapon to be louder but most of the time it is the other shooters in close proximity that will find the shots fired to be louder. This is typically a result of the other parties feeling the shockwave generated as opposed to the sound itself.

Originally, muzzle brakes were meant for use on calibers that generated a lot of felt recoil and they were commonly found on belted magnum rifle cartridges intended for big game or dangerous game hunting or bolt-action pistols chambered in 308 Winchester and 30-06 Springfield for use in handgun hunting. However, this is not always the case and they have been used successfully on rifles where a muzzle brake would have been uncommon even a decade ago.

Competitive long range shooters tend to favor muzzle brakes, as the redirected gas and flash allow them to maintain a better sight picture. Three gun shooters like muzzle brakes as they can allow for faster follow-up shots and a reduced recoil impulse.

What is a Compensator?

A compensator is a type of muzzle device that works in a different way than a muzzle brake. A compensator’s primary role is to reduce “muzzle flip” or “muzzle climb.” While some manufacturers claim that they aid in recoil reduction, this is not entirely true, as most compensators operate on a different principle.

What Does a Compensator Do?

Most compensators divert gases and muzzle blast in a downward fashion to keep the firearm from rising during the firing sequence.

Eventually, the compensator made its way back to rifles, primarily semi automatic modern sporting rifles (MSR), as the virtue of decreased muzzle rise was seen as an asset on the competitive shooting circuit.

One type of compensator that caught the attention of shooters was the linear compensator, which directed the noise and expanding gasses forward and away from the shooter. While it did not suppress the sound in any way like a silencer, this redirection of sound reduced concussion and the perceived decibel level, making for a more pleasant shooting experience.

A Muzzle Brake vs. a Compensator for Use with a Suppressor

When it comes to using a suppressor for your firearm, the muzzle brake and the compensator are typically trumped. A silencer acts like the ultimate muzzle brake or compensator because it contains the burning gases and muzzle blast within the body of the can. Most suppressors reduce felt recoil, muzzle climb, and most importantly noise and concussion.

The use of a muzzle brake or a compensator plays more of a role when the suppressor is not mounted and the weapon is being fired unsuppressed. If the shooter is more concerned about recoil control, the muzzle brake may be the way to go. If recoil is not a factor but controlling muzzle rise or flip is an issue, then something like a linear compensator could be the answer.

However, there is another factor to consider when shooting a suppressor and using a muzzle device where a muzzle brake may be the clear winner.

Every time a suppressor is removed and reattached, the point of aim can change. In a similar manner, most muzzle brakes and compensators will not always line up or index correctly when they are moved and reattached. The ports need to be timed in position with the barrel and the shooter may need to use shims in order to properly obtain alignment, as well as torque the device to the barrel properly.

The best of both worlds is using a muzzle device as the mounting system. As we mentioned earlier, a muzzle brake mount is usually ideal for this role.

Most muzzle brakes are built with an expansion chamber that aids in their function of reducing felt recoil. In a number of instances, a properly made muzzle brake with this feature will absorb the brunt of the burning gases behind the projectile as the bullet leaves the crown of the barrel.

Rather than hit the baffle head-on, much of this is absorbed by the muzzle brake now acting as the mount for the silencer. This prolongs the life of the suppressor and most shooters would rather replace a muzzle brake out of pocket than have to deal with the hassles of sending a suppressor back to the manufacturer for service and repair.

Another benefit with the muzzle brake mounting system is that the mount should allow the silencer to index correctly to the barrel repeatedly. This helps maintain the rifle’s point of impact so that the shooter does not have to re-zero the rifle every time the suppressor is attached. Some shooters do not need to worry about this, as they leave their silencer mounted all the time, but it can be an issue if you need to remove the silencer for transport or storage or if you move the suppressor from one host to another.

Which leads to the next benefit. A proper suppressor mounting system in the form of a quick detach or QD muzzle brake mount as opposed to a direct thread allows the shooter to have more versatility with a suppressor or silencer. 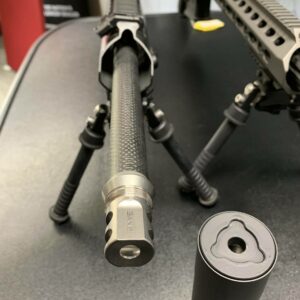 When direct thread silencers were the only option, shooters were limited in moving their suppressor from one host to another. The barrel threads had to be the same pattern as the female threads of the suppressor and that could prevent mounting a .30 caliber can with a thread pitch of 5/8 x 24” onto a .22 caliber barrel with a thread pattern of ½ x 28”. The muzzle brake mounting system changed this because now the shooter just needed to obtain an additional mount as opposed to going without a suppressor for a different host or having the rifle barrel threaded or recut to match the thread pattern of the silencer.

These reasons are what makes the muzzle brake a better choice, in our opinion, for shooting suppressed.